Nope, not an Orwellian vision of tracking your movements, but a very practical tool that is just about to go into trial on some of London’s buses.

A new display screen has been installed on a bus, next to the driver where people board the bus, and on the staircase — and it shows in fairly clear graphics, exactly what the availability of seating upstairs is like. 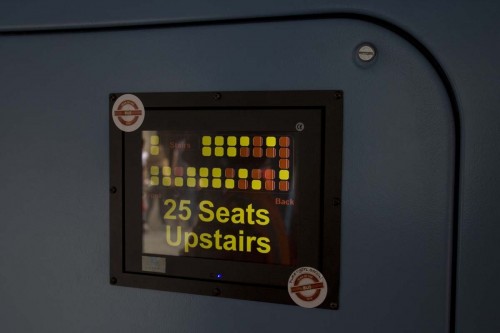 Apart from the obvious instant realisation that there are indeed seats to sit on, it saves that ever so English embarrassment of going upstairs, popping your head up like a meerkat at the top of the stairs for a look around, only to come back down again. No one notices you did that, but you know that secretly everyone on the bus is laughing at you.

It also confirms if there are two seats next to each other, so that a couple can sit on the same bench rather than being separated, or hoping that someone will take pity on their discomfort. 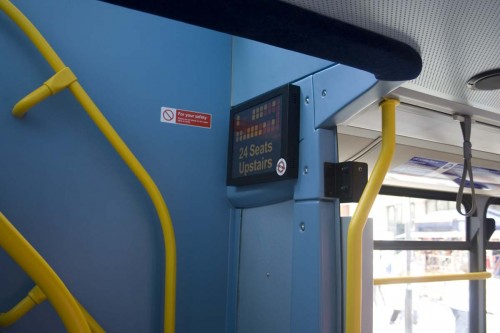 So, how does the bus know if a seat is being sat in? Well, not the way you probably think!

The technology being tested doesn’t have sensors in the seats — but takes advantage of the existing CCTV cameras on the upper deck, and they can then use that to know if a seat is occupied, or not. You might recall a recent report about a similar idea being trialled to know how many people are waiting to cross a street at traffic lights.

Body counting like this is fairly standard off-the-shelf technology now, often used in shops and the like to track customer flows. Here, a more practical application for the customer themselves — to know if there are spare seats upstairs.

It’s also quite anonymous, as body trackers prefer quite low resolution images to make data processing easy. Even if the system stored the data, there’s practically no use that could be made of it outside the bus itself that couldn’t already be gleaned from the CCTV recordings. 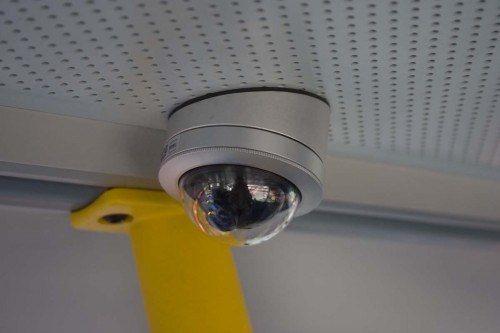 The one on display was in random-display mode, as upstairs certainly didn’t match what the display said it should have been like, as upstairs was empty when I visited, but showed invisible bums on seats. Maybe it was a bus full of ghosts.

Expect to see live applications on the Number 12 bus route in a week or two.

The other bit of new technology is around the corner on the same bus, and has been seen on some buses already — a live travel map. 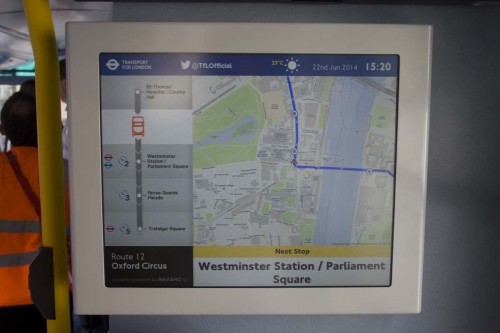 The map plots the route the bus is taking, shows up the live position and the time to the next bus stops.

Apart from being an additional bit of bus route information, putting up an area map can overcome the perennial question that bus drivers face of which bus stop is nearest to the venue the person wants.

It is actually surprisingly difficult for the brain to easily jump around between driving a bus, knowing the route, and also accurately knowing whether a familiar landmark is on the same route.

I often pause for a moment when giving directions, simply to get it right in my head before I say anything. Bus drivers are often asked the same things, and also expected to remember that someone 20 minutes ago asked for a reminder when arriving at the hospital.

The live map is only in one location on the bus, but should alleviate some of that issue.

More usefully for regular bus users, the map is also tied into the TfL travel alerts, so if approaching a tube stop by bus, it can warn of problems on the tube before people get off the bus.

Buses are getting intelligent.