On the day that happens to have the second-shortest night of the year, London Underground has released its Night Tube map. 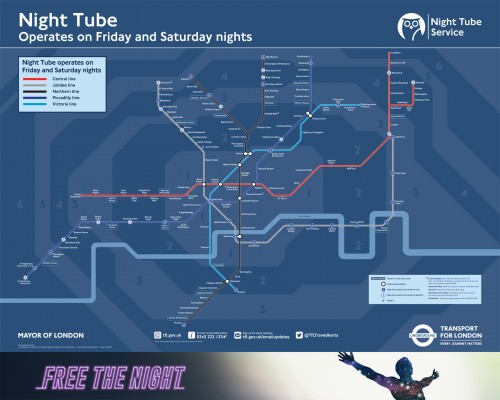 The Night Tube will see trains running at least once every 20 minutes on the following lines on Friday nights and the early hours of Saturday and Sunday mornings:

Around 560,000 people already use the tube after 10pm on Fridays and Saturdays, equivalent to 8% of all trips, while night bus usage has rise by 170% since 2000. TfL’s modelling suggests that nearly 180,000 trips will be made on the Night Tube between 00:30 and 6am. Just under half of this is expected to be newly generated trips, with the remainder resulting from people switching from buses and taxis to trains.

It’s estimated that those switching from bus to tube will reduce journeys by an average of 20 minutes, although for people at the edges, journeys could be up to an hour shorter.

It’s also expected that the Night Tube will support around 2,000 permanent jobs, 85 train drivers and 180 station staff, and 1,700 indirectly in the night-time economy, taking into account impacts on London’s night-time economy and the additional London Underground staff that would be required.

While a lot of the attention will understandably be on the nightclubs etc that send partying people home in the hours after midnight, it may surprise you to learn that they represent just a third of current night bus traffic.

The biggest impact is likely to be on traffic heading in the opposite direction. A survey carried out in 2008 for TfL indicated that just under half of night bus passengers are either travelling to or from work, or on employer’s business.

The early hours workers who clean the offices, stack the shelves in shops, handle the warehouse deliveries, all able to get to work much quicker.

For many of London’s lowest paid workers, the Night Tube is an extra half-hour in bed. 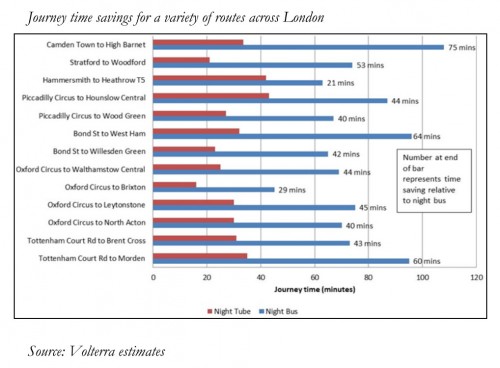 Subject to the usual fuss from the unions about the service, expect the first Night Tubes to run on the early hours of Saturday 12th September.

Additionally, by 2017 night services could operate on London Overground services and by 2021 on the Docklands Light Railway. Night Tube services will also be expanded to the Metropolitan, Circle, District, and Hammersmith and City lines once modernisation programmes are complete.