While Mr Tate of Tate and Lyle is famous for giving a gallery to the country, rather less known is the generosity of the other half of the company – which is manifest in a public park donated by Sir Leonard Lyle.

Abraham Lyle & Son was one of a number of food processors which came here from the west of Scotland and established a factory at Plaistow Wharf in 1881. In 1878 Henry Tate and Sons of Liverpool had moved to Thames Wharf where they manufactured sugar cubes. The two firms joined in 1921 although they kept their separate sites.

In 1924, Sir Leonard Lyle donated the land to West Ham and opened a park for the benefit of local residents. At the time, a lot of people lived in the area, crammed in around the warehouses and factories and the provision of a park was a rare oasis of greenery in the region. Today, there is considerably less housing in the area as modern transport encouraged people to live further away from work and commute each day – but the park remains. 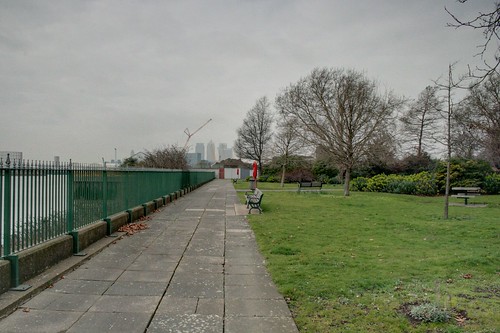 Unless you know about it, the park is not something you will stumble upon by accident – it is on a small side street and all that is evident to the causal glance is a small park with a children’s play area dominating the space.

Getting into the park proved a mini-challenge as the main gate was locked – but spying a parent with children inside suggested entry is possible – and a side gate turned out to be the entrance of preference. What is not obvious is that around the corner from the children’s park is a long path, lined with trees and tended planting that leads the main park, which is split into two areas. 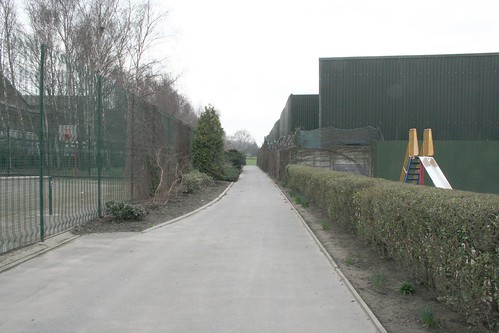 A football ground dominates the first half, with what looks like changing rooms to one side. The football pitch is still in use judging by the freshly applied paint to the grass and seems to be home to the Canning Town football club.

A raised area further along has had a varied history. Originally laid out with planting and a bandstand in the centre, this was redesigned in the 1970s with the bandstand removed and the area re-landscaped.

In 1994 a set of ornamental wrought iron gates was installed as a decorative feature. These are the original gates to the Harland & Wolff factory which was based in North Woolwich between 1924 to 1972 and handled repairs to ships. 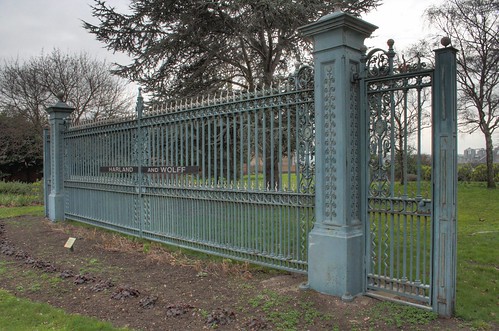 When I arrived the park was utterly deserted.

Generally speaking, if there is a park, it will have people in it, even if just drunken layabouts, but this park was utterly abandoned by humans. The aforementioned dad and two children did wander down for a short look around, but didn’t linger.

The lack of local housing and the park’s distance from the rest of the businesses in the area is probably a large part to do with the lack of users but it did seem a bit of a pity. Admittedly, the fact that it is surrounded by a factory on one side and an aggregates store on the other might be an additional deterrent.

There are some nice touches though. I quite liked the litter bins, very much more the sort of thing I expect to see in a woodland park than the usual cheap metal bins you might expect in municipal parks.

At the bottom of the football pitch sits a water fountain which is also a war memorial. It appears to have moved at some point, as older photos show it being a in a more prominent location, but is now shunted a couple of meters to one side to sit next to the wall. 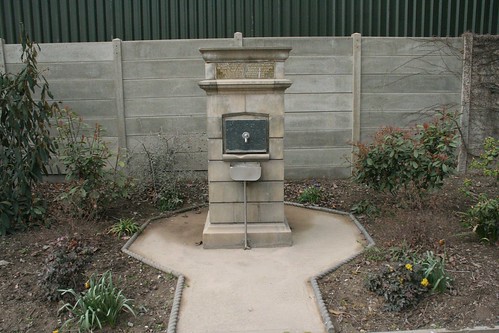 The inscription on the war memorial is still intact though, and strongly reminded me in style of the Postman’s Park plaques, although that could be pure coincidence.

It’s a desolate park, and probably looks nicer and maybe busier during the summer months, and I am not the only person to have observed its emptiness. It rewards a detour from the nearby rather busier Barrier Park next to the Thames Barrier though. 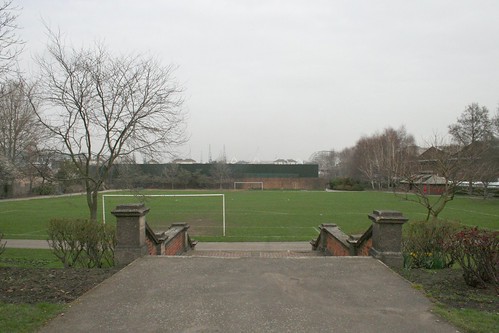