Published 21 January 2010 by By Ian Mansfield Events and Tours, food and drink

Last night, a small coterie of bloggers were invited to a London bar for an early informal Burns Night style event – organised by a PR agency for the Talisker Whisky brand.

London bloggers were invited along thanks to the somewhat dubious, and hopefully tongue in cheek idea that Burns’ habit of writing on scraps of paper and leaving them tied to trees made him a sort of early blogger. Hmmm.

I went along as a good many years ago, I used to manage an off-license where we sold around 35 different malts, and Talisker was always one I was warned off trying unless I was used to drinking whisky as it has a strongly distinctive flavour. As much of my retailing of wines and spirits was based more on theory from reading about the drinks than the practical experience of tasting them (an off-license manager’s salary was never enough to buy the products), I took the warning at face value.

Hence, the chance to try the dreaded beast was sufficient to peek my curiosity.

The venue is a dedicated whisky bar on the Edgware Road called Salt, which if asked blindly, I would have presumed, from its name, to be a Tequila specialist. Silly quibble aside, the venue has built up a reputation and going inside certainly explains why with a veritable cornucopia of whiskies on the shelves – we were told about a hundred different “expressions” were available.

I forgot to ask why they are called “expressions” – sorry.

Anyhow, a starter with a Manhattan cocktail – which I was advised by some fellow bloggers who were more familiar with the drink, was rather good. I don’t mind cocktails, but I tend to prefer the raw product – partly for the flavour, but also I really do find the whole cocktail mixing performance to be incredibly embarrassing to watch.

On to the main event, an introduction by Burns expert, Clark McGinn as to who Rabbie Burns was, why he is terribly important to Scots and how the whole Burns Night Supper became such a widespread phenomena – then on to the whisky tasting.

What I like about a good drinks tasting is not just being able to taste the drink while someone explains what those flavours are, but also if the tutor goes into some detail about how to get the most out of the drink.

With whisky, as most spirits, you have to hold the drink in the mouth for a while before swallowing, typically 10-15 seconds to let the flavours come out – before the real hit from the alcohol. Our tutor explained what to expect and the more he went on, the less comfortable I felt. A recurrence of the sick sensation I get prior to a roller-coaster ride when I want to back out but am trapped in the queue ensued, but actually, like the fairground ride, the end event is always quite enjoyable.

A few red faces were seen around the room though as a 10 year old whisky erupted into a sensation of hot chillies after a short swilling around the tongue. Ahh, so that’s why I was warned off trying it!

Being a Burns Night event, we really couldn’t avoid haggis, and it was brought in to the room, proceeded by a bagpipe player in full highland dress. Our host then read the traditional Address to a Haggis, while waving a large knife around the place in a manner quite likely to cause consternation to our elected leaders down the road in Westminster. 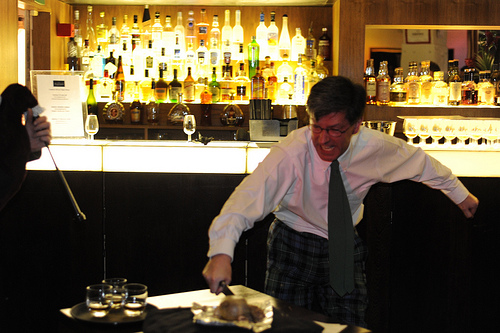 A second drink had been switched from normal oak barrels for an additional couple of years of ageing in flavoured ex-sherry barrels. I think for a beginner, it would be an easier whisky to drink as the drink is smoother to taste – but for me, it lacked the sharpness that I prefer my drinks to have.

The evening finished off with a special drink which is whisky made the old-fashioned way, that is to say, without being aged for a decade or more in an oak barrel. It is also quite a bit stronger than normal spirits, being 57% by volume of alcohol. In fact, this was my favourite of the night (typically, I end up preferring the most expensive one!), and not because of the strength, but because it genuinely tasted a lot sharper with nicer flavours.

An info-sheet that was handed out explained that an expected 2 million drams of whisky will be drunk on Burns Night, at around 10,000 parties worldwide – which will probably result in the Daily Mail writing a polemic about binge drinking on a “school night”.

I’ve never quite understood the disgust that some people show when the thought of eating haggis is discussed as it really is just flavoured minced meats. People who happily eat sausages tremble in fear at the thought of a haggis, but in reality, there isn’t that much difference between them. One is simmered in the animal’s stomach, and the other cooked in pigs intestines, what is there to panic about?

Incidentally, ever wondered what a haggis looks like before it is shot, skinned and sold in supermarkets? 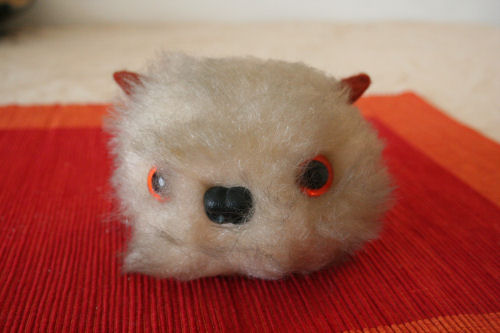 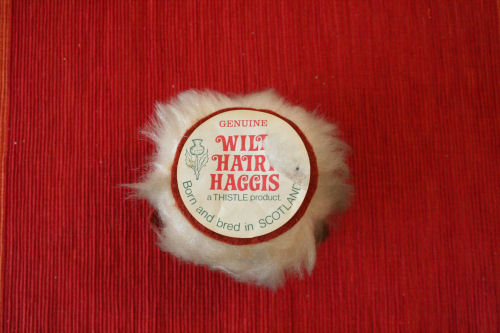 Something I was given as a kid, purchased from a Scottish clothing and ephemera store in Windsor.

There are some Burns Night Suppers dotted around London on Monday, and Talisker themselves are offering free drinking glasses if you buy a couple of drams on Monday – although in London, only two venues seem to be participating: Lion, 295 West End Lane, NW6 and OSP, 80 Fulham Palace Road, W6.

My local city farm is hosting a Burns Night supper, however and quite horrifically, their invite included a note that they would offer a vegetarian haggis.

There is only one thing worse that trying to create a vegetarian option from something so definitively meat based – and that was what I saw in my local Waitrose the other day. A one-minute microwave haggis.

What is the world coming to?

1 Pings/Trackbacks for "Talisker Tasting and an early Burns Night"