If you were to walk up the spiral staircase to St Paul Cathedral’s famous whispering gallery, you might notice locked doors leading to hidden places, and behind one of them lurks a marvel.

A huge hidden corridor that runs around the nave hidden high up above the heads of the worshipers below.

No one is entirely sure why the space is called a Triforium, but in ancient times someone described a similar space in Canterbury with such a name, and it stuck.

For those Cathedral’s large enough to have one, it’s a valuable space, often used for storage, or getting around without using the main floor — and here in St Paul’s Cathedral it’s also the route to two hidden marvels. 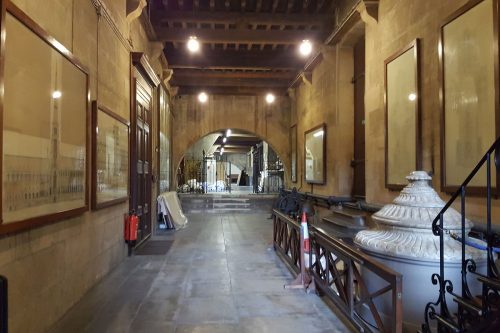 Small tours are allowed to ascend up the famous spiral stairs, and then turn left through a locked door into a space that has plain walls, but a richly decorated ceiling. The ceiling is thus, as it can just about be seen from within the main part of the Cathedral, but the rest is hidden from view and unadorned.

In fact, most of the Cathedral was plain, until some Victorians decided it really needed some more oomph, and started covering the walls in mosaics. Then some other Victorians were aghast and protested, so now we have a Cathedral that’s half richly decorated, and half that’s plain.

What’s also plain is the hidden Triforium, which is unadorned stone, and used as storage. Such as a collection of stones that come from the previous Cathedral that burnt down 350 years ago, or cupboards full of documents. 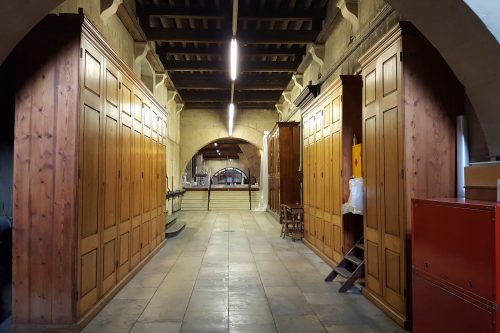 And a door. A door to a library that hits you strongly with the smell of centuries of old books as you pass within. A door that leads to a small but ornately decorated space.

A painting of Henry Compton, Bishop of London hangs over the fireplace, who is quoted of saying he found St Paul’s burnt to the ground, but left it built up high again. Fortunately, he was more generous than modest, and the first 2,000 books of the post-fire’s library collection were donated by him.

Should you want to study its liturgical  tomes, it’s open to the public who can show a need to visit. 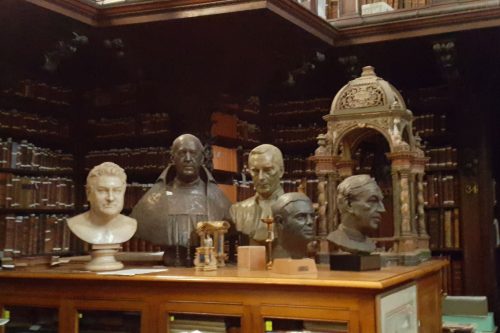 Throughout a visit, you are hidden from view, and from seeing the public space, but a Triforium isn’t always concealed behind stone walls, and here at St Paul’s it leaps across the main entrance with an open bridge that offers stunning views of the length of the nave.

It’s also “inside” the main Cathedral, so no photos here. But up here is where choir’s might stand, where trumpets blow when the Queen arrives, and where a small organ is remotely played.

Thanks to reverberation, the sound of the main organ further away takes about 6 seconds to reach this end of the building, and if a choir is singing, they will be out of tune. So a small organ up here replicates what the main organ does far away, and keeps the singers in tune with the music.

The massive heraldic trumpets are fairly new, and it is reputed not liked by The Queen who was more than a bit startled when she visited for the first time after their installation.

However, there is another room up here which is reserved for something that never happened.

Sir Christopher Wren famously altered the design of the Cathedral from what he was authorised to build to what we have today — but there was an earlier design. And this room houses a massive model which was constructed to show off the idea. 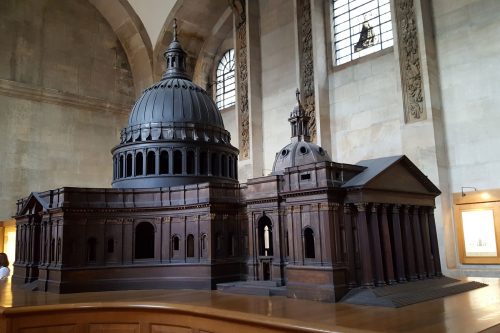 It’s also decorated within, and if you have the key, there’s a door on the plinth a person could crawl through to see inside as well as outside. However impressive the model is, it failed to impress the Church of England.

Their main concern is that churches take decades to build and need to fund raise throughout the construction, and the first version of the rebuilt St Paul’s couldn’t be used during construction. They wanted something which could start offering prayers to God and taking collections from Man as quickly as possible.

Thus the current version, which started at one end, and soon as that was nearly completed, they could turn it into a modest church and then extend slowly down the nave as it in turn extended.

Although not part of the regular tours, this huge room is laid out museum fashion, with lots of early drawings and models, and the death mask from Sir Chris himself.

Tours of the Triforium used to be for prebooked groups only, but now more conventional tours are offered of the space above your heads a few times per month.

Tours cost an additional £8 on top of the admission fee to the main Cathedral, and have to be booked by email. Details are here.

Some 1.6 million people visited St Paul’s Cathedral last year, but only a small handful can claim to have been into the Triforium.

You also get to stand at the top of the “harry potter” staircase and stare down at the ordinary visitors staring up. 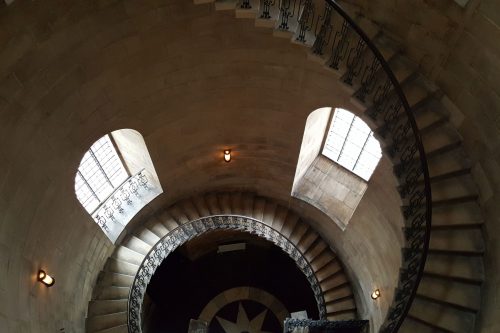