Take a ride on one of London’s Miniature Steam Trains 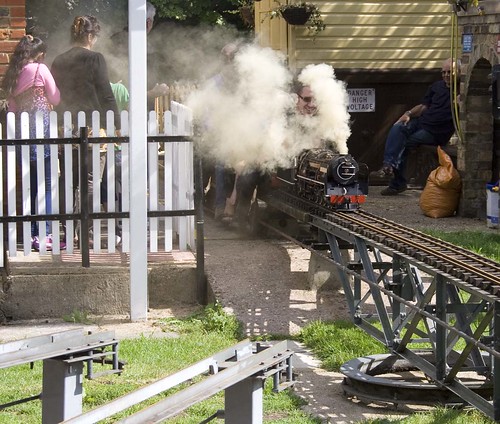 A lot of them are opening up now for their summer season, and some are open this coming bank holiday.

Opened in 2009, this 7.25 inch gauge railway offers trips of just under 1/4 mile from Park Gates Station to Lakeside Halt.

Still a fairly small service with just a few carriages, they are expanding the network.

Open every weekend from May to October.

Fares are 70p per return trip.

One of the best kept secrets in Chingford is the 2 model train tracks at the back of Ridgeway Park. There is a 1000 foot long 5″ raised level track and a 3000 foot long 7¼” ground level track.

Fares are 50p per trip

(NB, if traveling by tube, stop off at nearby Greenford to see London Underground’s last remaining wooden escalator)

A big railway for a miniature service – offering sit in carriages rather than the sit-on variety used by smaller model services.

The two and a half mile round trip on the 12-inch gauge service takes about 35 minutes.

Fares are £3 return for adults and £2 for children.

Usually open most weekends from April to November, details still to be confirmed at time of writing.

Open on the first Sunday of every month April to October and also Bank Holiday mondays.

Open on the first Sunday of every month May to October (special date in April) in the afternoons.

More of a fun ride than a proper railway, this is an elevated track that runs in a loop around part of the zoo giving an unusual view of the animals.

Trips are included in the admission to the wider venue.

Added for completeness, but actually closed until late 2013 for restoration work – this is a light railway that runs along tracks laid for the original coal carrying railway that serviced the steam engines in the pumping station.

This is a newly restored light railway associated with the steam pumping station and should open to the public sometime this spring or early summer.

OK, the “dinky little railway” probably shouldn’t be here, but if you’ve never used it – the fun of sitting right up front is quite memorable.

Tip – for best chances of a “drivers seat” catch the train from Tower Gateway station and wait right at the far end of the platform.