Take a ride on one of London’s miniature Steam Trains

Published 9 April 2016 by By Ian Mansfield Events and Tours 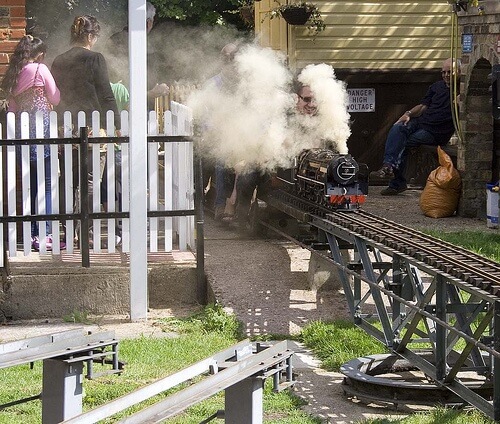 One of the best kept secrets in Chingford is the 2 model train tracks at the back of Ridgeway Park. There is a 1000 foot long raised level track and a 3000 foot long 7¼” ground level track.

Open on the first and third Sunday afternoons each month from May to October.

Fares are 60p per trip

The small railway is located in the centre of Ickenham and has been giving rides to the public since 1970.

Open on the first Saturday of the month from April to December in the afternoons.

A big railway for a miniature service – offering sit in carriages rather than the sit-on variety used by smaller model services. The two and a half mile round trip on the 12-inch gauge service takes about 35 minutes.

Open most weekends from April to October, and every day in August.

Open on the first Sunday of every month April to October and also Bank Holidays.

Open on the a couple of Sundays of every month May to October in the afternoons.

This is a light railway that runs along tracks laid for the original coal carrying railway that serviced the steam engines in the water pumping station.

This is a newly restored light railway associated with the steam pumping station.