Over the next few weeks, people will start typing E20 into websites as the first part of their address as they move into new flats built on the Olympic Park.

They’ll also probably get “address not found” as most websites don’t update their postcode databases as often as they should.

Anyway, what is officially known as East Village London, as a harbinger of when villages are made from tower blocks as opposed to cottages is now nearing completion.

The site is a mix of buildings constructed for the 2012 Olympics as accommodation for the athletes, and new blocks that have gone up since. These are then split up by a range of green areas which have been generally built up into mini hills to stop the area from being a wide flat expanse of boring grassland. 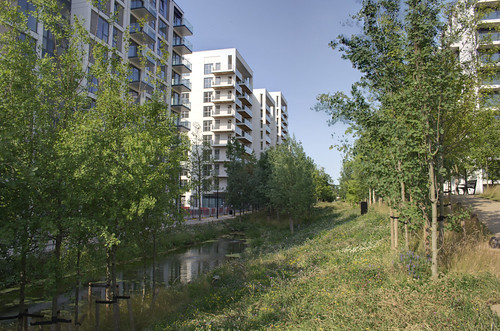 One of the more interesting aspects is to the west of the tower blocks though — the water reclamation wetlands. A series of artificial ponds have been created that will be fed with rainwater from the tower blocks guttering, and there will be slowly filtered and reused either as water for the plants, or to flush the toilets in the nearby school.

When the weather is as it has been in recent days, then a borehole can supplant the missing rain, and in even drier times, they can take pre-treated water from Abbey Mills and use that.

The land around the ponds was previously occupied by a refrigerator manufacturer, and over the decades, the ground had become saturated with refrigerant, effectively created a permafrost in the soil. That contaminated soil had to be removed first.

While we were on site, a couple of ducks wandered past having already made a home, and it turns out that there are fish in the ponds, even though no fish were put there. They suspect fish eggs being transplanted in the mud on birds feet is responsible for that. 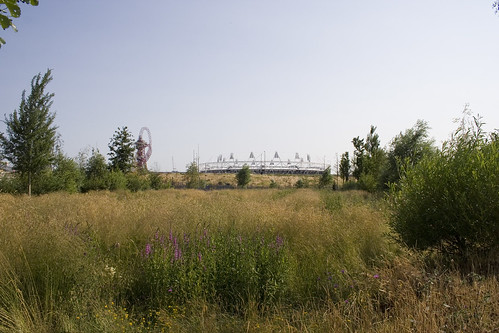 Some tree trunks look like they have been simply rammed into the ground, but are in fact mounted in concrete to keep them upright — tall tower blocks for stag beetles to mirror the towers for the humans nearby. 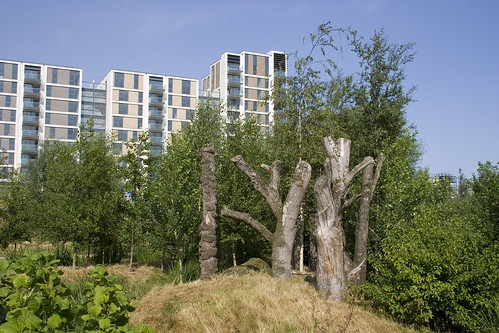 One of the less noticeable parts of the design is dealing with the fact that this has been built on a flood plain. The River Lee does flood at times. Further away from the flats, and where lots of people used to sit to watch big screens during the sports, that area is deliberately designed to absorb flood waters.

Closer to the homes, where a river channel runs past, almost imperceptibly, the path dips down a bit to allow water to overflow into the ponds — and the path here had to be reinforced to withstand the water flowing over it. 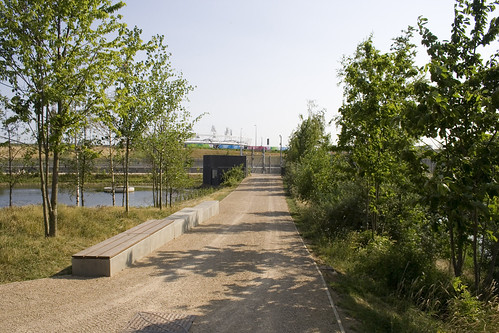 As with the — highly praised — landscaping during the Olympics, the plots of greenery amongst the flats will be a mixture of wildflowers, manicured lawns, and lots of trees. I was pleased to see London Plane trees being used, as they great at cooling the air around them — if allowed to grow to their full potential. 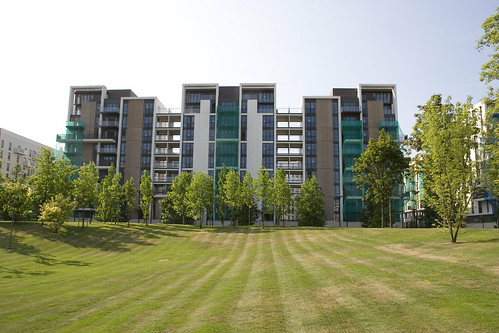 The new roads are a little unimaginatively being named after the previous sporting events with the likes of Celebration Avenue and Victory Parade.

There also seems to be a fairly sharp dividing line between the quality of the external finish on the buildings that went up for the Olympics and the ones that have gone up since, and will probably be reflected in which are social housing, and which are sold at commercial rates.

Some seem to have used gaudy colours on panels instead of the more expensive, and to my mind, rather nicer concrete detailing with fossil inserts. 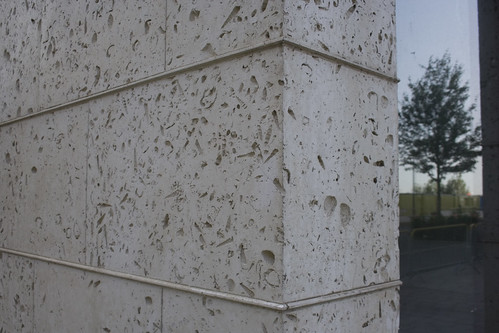 Early residents might also feel a bit like they are stepping back in time a bit, to the late 1980s, when the docklands area was lots of wide empty roads and fresh new buildings. It shouldn’t take as long to colonise though.

During our visit, a pop concert was in rehearsal just behind the flats. When the stadium reopens, that sort of thing will move down the road, but depending on your perspective, you may enjoy, or loathe living near a major events venue.

That said, I personally wouldn’t object to living here – the nice park lands and good transport links are quite appealing, and I can always close the windows on music nights. I doubt I could afford it though. 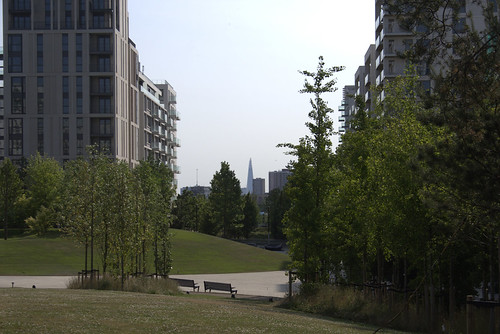