Take a last trip in the Woolwich Free Ferry

For just over 700 years, there has been a ferry service across the Thames at Woolwich, and it’s about time we took a trip in it, and there’s a reason to do so now.

There are more convenient ways for pedestrians to cross the Thames at Woolwich, but now is a good time to take a trip by ferry if you haven’t as the old boats currently crossing the river are to be replaced, so you don’t have too much longer to ride in them.

A ferry at Woolwich has existed since at least 1308, but it really took off when the military arsenal was built at Woolwich. With plenty of workers needing to cross the river each day, as the Arsenal grew, so did demand for a better ferry service.

A railway tried to operate three smallish ferries in the mid-19th century, but it was an act of Parliament in 1885 that authorised the Metropolitan Board of Works to provide a free ferry service, funded by taxes for the area.

The sewer king, Sir Joseph Bazalgette headed the team that commissioned two side-loading paddle steamers. Unfortunately for him, two days before he was due to turn up and launch the new service, the Metropolitan Board of Works was replaced by the London County Council (LCC), and the opening ceremony was conducted by Lord Rosebery instead

The steam ferries were replaced in the 1960s, with the three ferries that still work today — all named after leading politicians.

The ferry is still a vital road link for the area, carrying around 20,000 cars per week — but the lower deck of each ferry is a remnant of older times, being a vast space for pedestrians.

Pedestrians who can be counted by the handful, on a busy day, and less than that on a Sunday.

The approach to the ferry on the northern side is, not that unsurprisingly, not unlike any port, being a large rather barren looking car park space, where thanks to congestion, motorists can often be held during peak hours.

Pedestrians have the fast lane though for once, although a terse concrete shelter offers waiting space if the weather is poor. 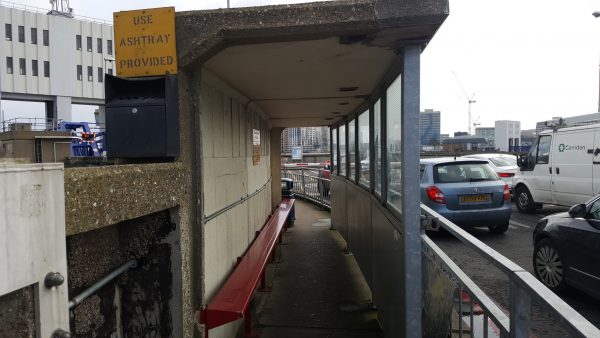 Tides determine the steepness of the slope down to the ferry, and you can either wait up on top deck, or head down to the waiting space below. 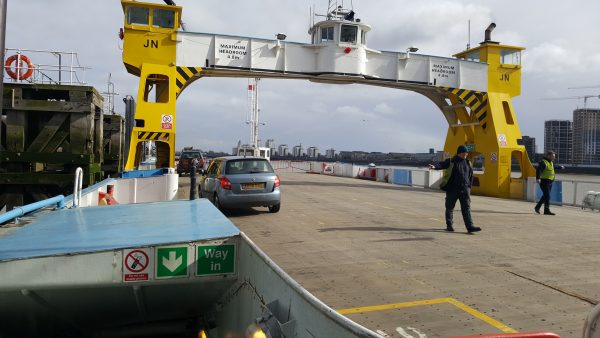 A vast array of room like spaces carved out the walls holding the motorists deck above, and a long corridor that throbs with the rumble of the two massive engines within. 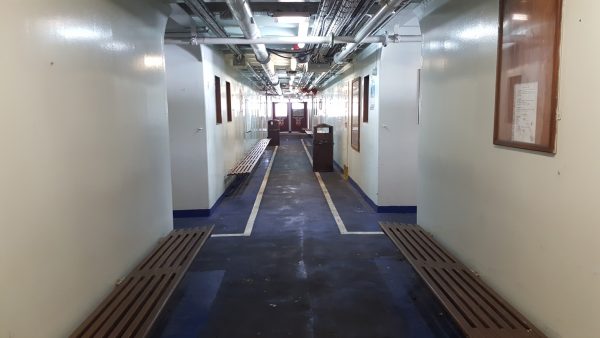 It’s a curious space, vast and empty, yet thanks to the way it’s laid out in “rooms”, almost cozy and welcoming. You can imagine workers and families sitting down for a few minutes of gossip on the short trip, grateful for the more human sized alcoves offered.

A couple of more intimate rooms with sliding glass doors offered more comfort on cold mornings, but are now locked. All around the warning signs of the perils of riding the waves, and the launch of the ferry was heralded by a safety notice should the boat sink. 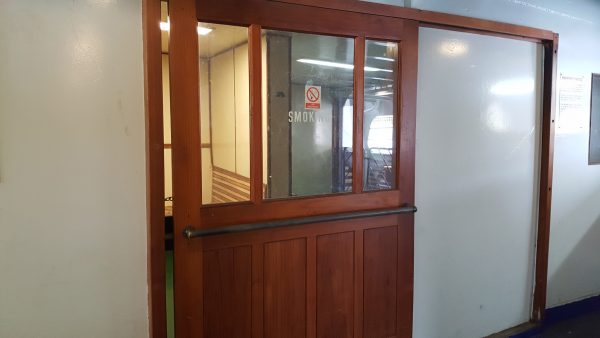 Which at low tide on the Thames would barely affect anyone on board who would probably just get very bored waiting for rescue.

Although I was alone below, up on deck there were passengers. While the foot tunnel and DLR offer alternatives now, for those with prams, the ferry is still often the more convenient route across.

Soon though, the wooden benches and old boats will be swept away. 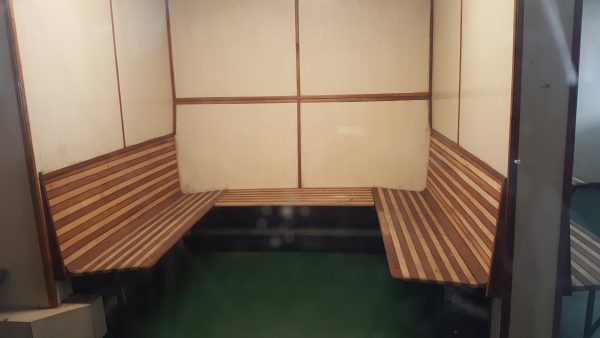 A fleet of new ferries have been ordered and while the specifics are still being worked on, it’s highly unlikely that they will have vast empty spaces for non-existent pedestrians to use.

You have roughly a year left to use the current 1960s era ferries, before their replacements arrive.