About the Wellington Arch

A monumental arch on the edge of Hyde Park that also conceals a museum and viewing gallery.

There's a permanent display of the arch's history, how it was moved to its current location, the controversy about the statue on the top, and its use as a small police station.

There is also a running temporary exhibition in the upper galleries, where you can also go outside to the viewing gallery for wonderful views towards Hyde Park and Buckingham Palace.

To mark the 200th anniversary of the Battle of Waterloo, the Duke of Wellington’s London home, Apsley House has re-presented Waterloo Gallery where Wellington held annual banquets to commemorate the great victory.

Another chance to see the Almost Lost exhibition

If you missed the exhibition of visions of a concrete clad London that were planned in the 1960s that recently took place at the Wellington Arch, there is another chance to see some of the exhibits.

A new exhibition has opened inside the Wellington Arch at Hyde Park that looks at how the architecture associated with the motor car changed the landscape.

Running under Hyde Park Corner is a road tunnel built in the 1960s to relieve congestion on the roundabout above, and sitting slap bang in the middle of Hyde Park Corner, surrounded by war memorials is a gigantic ventilation shaft to extract car pollution from below.

How close London came to being covered in concrete

One of London’s greatest strengths, and in some ways, its greatest curse, has been the lack of a dominating Overload with the power to tear down entire chunks of the city and rebuild it in their preferred style.

Wellington Arch next to Hyde Park has swapped out the display inside the top of the arch bit and is running a short exhibition on how 20th century buildings, often derided have been preserved and in some cases, gained affection.

Almost everyone who has visited St Pancras station has taken time out to look for the statue of John Betjeman in his famous upward staring pose holding onto the trademark hat. 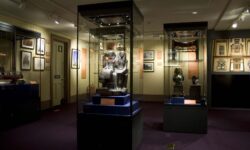 London is packed full of various lumps of ancient Egypt cluttering up museums who by various means in the past acquired them, so another display in another museum might seem excessive.

Wellington Arch, the huge triumphal pile of stone at Hyde Park Corner has gained a tiny bookshop inside the arch itself – oh, and a new exhibition area upstairs. I doubt many people who casually wander past the huge archway…

£0  Egypt in England
This exhibition will reveal the influence of Egyptian culture and design on the architecture of England
2012-11-07
2013-01-05
£0  Pride and Prejudice: The Battle for Betjeman's Britain
Photographic exhibition of the destruction of buildings to both bombs and developers.
2013-07-17
2013-09-15