About the Wallace Collection

A grand mansion in the heart of London that's now an art gallery and in part, a museum of military armour and weapons.

It exists thanks to a bequest which gifted it to the nation, on condition that none of the objects leave -- so the art gallery houses some incredibly famous paintings which can only ever be seen here.

The military armour display is a bit odd in this setting, but interesting in its own right.

£14   Frans Hals: The Male Portrait
The exhibition brings together over a dozen of the artist’s best male portraits from collections across the world. 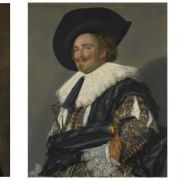 A friends reunion for the Laughing Cavalier

Later this year, one of the Wallace Collection’s most famous paintings, The Laughing Cavalier will be joined with a selection of other paintings by the same artist that have never been seen together before.

Rubens masterpieces reunited for the first time in 200 years

For the first time in 200 years, two great master paintings will be reunited and go on display in London.

For the first time in over a century, one of central London’s lesser known, but rather wonderful museums, the Wallace Collection is to be allowed to lend its collection of grand master paintings to other venues.

I was in the area watching a steam train trundle through the London Underground and taking a wander down to Oxford Street for some shopping remembered the Wallace Collection has a rather grand looking restaurant.

Free  Tales from Ovid's Metamorphoses
From ceramics and sculpture, find out more about Ovid’s magical stories and their influence in the display and gallery trail.
2017-01-19
2017-04-02
Free  Gilded Interiors: French Masterpieces of Gilt Bronze
A display of often overlooked gilt neoclassical design.
2017-05-04
2017-07-30
Free  El Greco to Goya - Spanish Masterpieces from The Bowes Museum
The first London exhibition of Spanish art from The Bowes Museum in County Durham, including works by Goya and El Greco.
2017-09-27
2018-01-07

Free  Sir Richard Wallace: The Collector
The exhibition explores the man, his life and his unprecedented contribution to the nation’s cultural heritage.
2018-10-15
2019-01-06