A feast of architectural models goes on display

If you fancy looking at St Paul's Cathedral as a jelly mould, then there's a new exhibition that'll sate your appetite.

A giant model of London coming to King’s Cross

A giant scale model of London covering most of Zones 1-3 will be on display in King's Cross this summer.

Imagine a building material strong enough to support a skyscraper, but without any of the CO2 emissions of concrete or steel, and you have the new wonder of construction -- stone.

Garish Holborn kiosk to be replaced with hexagons

The decade old information kiosk outside Holborn tube station could be replaced by a series of digital screens, if plans by the local business group is carried out.

Exhibition: The revival of ceramics on building facades

There's a bit of a revival going on in building land at the moment -- people are getting excited about covering buildings in ceramics.

Supermaterials on display at the Building Centre

In a land dominated by brick and steel and concrete, what will the homes and offices of the future be made from?

A Huge Scale Model of the City of London

Everyone loves a model village, and now the City of London has opened up its to the public.

The past and future of London’s roads on display

If you look at any map of a city, the dominating feature isn't the buildings, but the roads. It is their lines snaking around the city that mark out its regions and create the familiar boundaries we use to navigate.

A huge scale model of London

The Building Centre has replaced its already impressive scale model of London, with an even larger version.

Huge model of London to be replaced

If you haven't been to the Building Centre to have a look at their huge scale model of London, you might want to get along sharpish, as it is about to be replaced.

A history of the London Mayor — in cartoons

The office of London Mayor maybe fairly young -- by British standards -- but it has spawned a huge array of satirical cartoons about the two mayors we have so far elected.

Dotted around London can be found some of the Great Estates that are the consequence of developments by single minded owners often in Georgian periods. But the Great Estates are not just a historic quirk, but are a still growing phenomena across the city.

Planes, Trains and Drains at the Building Centre

A new exhibition about London's infrastructure opened recently in the Building Centre that shows off the three dominant challenges for the city in the decades ahead.

80th birthday for The Building Centre

Just off Tottenham Court Road sits the Building Centre and in a couple of months it turns 80, and will be hosting a range of events as part of an all-day celebration. If you’ve never visited before (what do you…

A couple of weeks ago, a small exhibition opened at the Building Centre with images of how the Crossrail stations are expected to look in 2017 when the railway eventually opens to the public.

The latest issue of the transport plans for the Olympic Park has been published. From a rail transport perspective, the key points: Stratford Station Stratford station passenger numbers are expected to double by 2016. The trebling of capacity and improving…

Sub-Brit Lecture at the Building Centre

Was back at the Building Centre in central London this morning for the final of their breakfast talks on subterranean London as part of their current exhibition. This morning’s talk was hosted by Andrew Smith from Subterranea Britannica (sub-brit), an…

Just back from a very interesting lecture at The Building Centre in central London, hosted by David Anderson, the Engineering Director of Crossrail. After wandering around the upstairs exhibition on subterranean London with a coffee – we were herded downstairs…

The ever wonderful Building Centre in London will be setting out a new exhibition from the end of next week all about â€œLondonâ€™s Hidden Infrastructureâ€. 28 FEBRUARY â€“ 19 APRIL 2008 As Londonâ€™s skyline becomes ever more clustered with new… 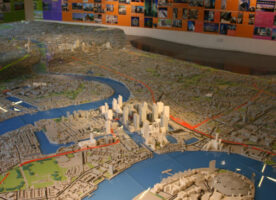 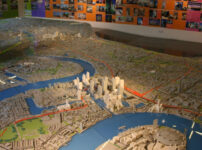 The ever excellent Building Centre in central London (just off Tottenham Court Road) is hosting an exhibition about plans for waterfront living and transport in the city. Not just the obvious River Thames and Lee Valley, but also several other…