About the St Paul's Cathedral

Access of the public includes the main floor, the undercroft where most of the monuments are based, and up high to the top of the dome.

Dome climbs can be a bit scary for those afraid of heights, but there is a chance to go outside and look down from almost the very top of the dome if you make it all the way up.

Tours of the triforium in St Paul’s Cathedral

St Paul’s Cathedral is running occasional tours of its triforium, the space high up above the nave once again during December.

St Paul’s Cathedral has restarted tours of its triforium, the space high up above the nave that’s not normally open to the public.

The Golden Gallery at the very top of the dome of St Paul’s Cathedral is now open on Saturdays and later this month, school holidays, for people with a good head for heights to visit.

Some of London’s Cathedrals, and an Abbey, are reopening to visitors of a secular nature, and those that need booking are now selling tickets.

There was once a hospital underneath St Pauls’ Cathedral

The grand staircase in front of St Paul’s Cathedral once had underneath it a small hospital staffed by volunteers in the days before the NHS.

A grand Victorian drinking fountain sits next to St Paul’s Cathedral, but it wasn’t there originally and only ended up there due to WW2.

Shepherd and Sheep in Paternoster Square

In Paternoster Square is a sculpture of a shepherd and sheep, also called Paternoster – the sculpture that is, not the sheep. They are unnamed.

Plans to revamp an existing office block next to St Paul’s tube station could see a large roof garden open to the public added to the top.

An annual tradition is being continued this Christmas, with a powerful performance of Handel’s Messiah in St Paul’s Cathedral.

This weekend, a huge video projection will be beamed onto the frontage of St Paul’s Cathedral, and some photos of the overnight tests have been released.

Over four nights in August, it will be possible to go into the mighty stone edifice and see it in the twilight hours.

It’s Christmas Eve 1924 and while people are preparing for the festivities, the City of London is busy preparing an urgent notice – they plan to close St Paul’s Cathedral.

An alley that can be traced all the way back to Tudor London, with a famously enigmatic stone plaque on one wall.

St Paul’s Cathedral has decided to allow photography within the building, overturning a ban that was often surreptitiously ignored anyway.

This is London’s shortest alley, and also one that you can’t actually walk down any more as modern gates replicate a medieval barrier.

An annual tradition is being continued this Christmas, with an uplifting rendition of Handel’s Messiah in St Paul’s Cathedral.

Late openings at St Paul’s Cathedral in the Summer

Ordinarily, visitors to St Paul’s Cathedral during the day are not supposed to take photos, but for five evenings, the Cathedral is opening its doors to photographers.

Earlier this week, the bells of St Pauls’ Cathedral were removed and sent back to their makers for repairs. Not that they are under warranty anymore, as they were made by John Taylor & Co in Loughborough… in 1878.

These massive stainless steel sculptural artworks near St Paul’s Cathedral are both art and function – for they are also ventilation shafts for an electricity substation in the basement underneath. 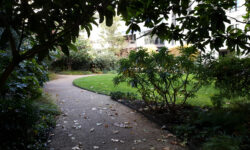 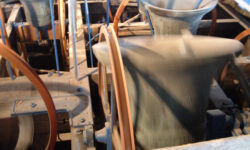 The bells of St Paul’s Cathedral are to be removed later this month for restoration work, meaning that the Cathedral’s celebratory bells will fall silent until late next year. 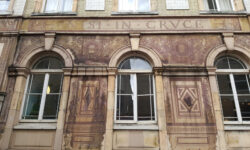 Hidden away from tourists on a side street, what is the former St Paul’s Cathedral choir school makes for a most unusual Youth Hostel today.

An annual tradition is being continued this Christmas, with an uplifting rendition of Handel’s Messiah in St Paul’s Cathedral.