About the Sir John Soane's Museum

Formerly the home of the neo-classical architect John Soane.

It holds many drawings and models of Soane's projects and the collections of paintings, drawings and antiquities that he assembled.

It's a rather eclectic display mirroring the collector, and can be quite cluttered, in a sort of charming sort of layout.

Note - entry is by timed ticket, which can be reserved for free from their website.

The old house packed full of curiosities is one of those museums that normally bans photography – but not in the evenings.

It’s a compliment of sorts when your museum is so popular that it has to stop allowing people to just turn up and visit. 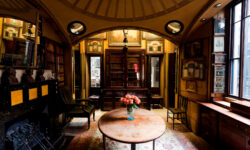 Free  Robert Adam's London
An exhibition of some of Sir John Soane’s Museum’s most beautiful and influential designs for Adam’s projects in London.
2016-11-30
2017-03-11
Free  Egypt Uncovered: Belzoni and the Tomb of Pharaoh Seti I
An exhibition revealing the story behind the Museum’s most treasured possession.
2017-10-11
2018-04-15
Free  Emily Allchurch: Visions of Architectural Fancy
A striking presentation of three works by the internationally-renowned artist, Emily Allchurch.
2018-05-16
2018-08-26
Free  The Return of the Past: Postmodernism in British Architecture
The exhibition focuses on the early, 'radical moment' of Postmodernism, which it reveals to be one of the most inventive periods in British architectural history
2018-05-16
2018-08-26

Free  The Architecture Drawing Prize
This year’s winning and commended entries will be exhibited at the Soane Museum this autumn.
2018-10-17
2018-11-18

Free  Eric Parry: Drawing
A major exhibition exploring the role of drawing in contemporary architectural practice through the work of one of Britain’s leading architects and architectural draughtsmen​.
2019-02-20
2019-05-26