There's a possibility of a naval ship arriving in London on Friday and passing through Tower Bridge.

This coming Saturday will give you a chance to go on board a Royal Navy ship moored in Docklands for a look around.

My scariest ever church tower climb

There's a very significant church in docklands that allowed people to climb up to see the clock mechanism at the weekend. The scariest church tower climb I have ever done.

Next Saturday, there will be a chance to wander around HMS St Albans which will be in Docklands on a visit.

Tours of a Royal Navy minesweeper

HMS Middleton, one of the Royal Navy's Hunt Class Mine Countermeasures Vessels (MCMV) will be in London next weekend, and the ship will be open for public tours.

Book tickets for free tours of a Royal Navy destroyer

One of the UK's newest Destroyers is coming to Greenwich later this month, and they are letting people on for tours. 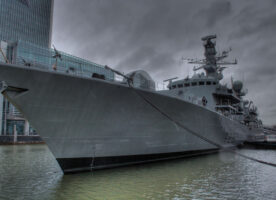 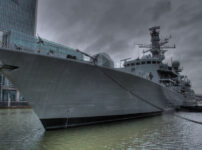 HMS Westminster, a Duke-class frigate is in London at the moment, based in Docklands, and this Saturday, the general public will be able to go on board for a look around.

Free Tours of the Royal Navy flagship at Greenwich

Next weekend, the flagship of the Royal Navy --the huge HMS Bulwark will be in London for a few days -- and there will be a chance for the public to go on board.

Pssst, want a second-hand aircraft carrier? Got one going cheap, only a few million miles on the clock. Go on, would look lovely next to the mantelpiece.

Next week marks a significant military anniversary, and lots of military things will be happening along the Thames as a result. And details have finally been confirmed -- including public tours of HMS Illustrious.

If you missed out on the chance to visit the Royal Navy's largest warship, currently doing Olympian security duties in Greenwich, then it has been announced that it will be open to the public again during the August Bank Holiday.

Free tours of a Royal Navy Warship on Sunday

HMS Ocean will be arriving in London this evening — an event I expect to photograph, of course — and will be based at Greenwich for the Olympics as part of the ongoing militarisation of sporting events. However, the general…

The Ceremony of the Constable’s Dues is one of those ancient traditions that the UK is so damn good at, can be indirectly traced back at least 700 years, and is related to the Crown’s authority over the City of… 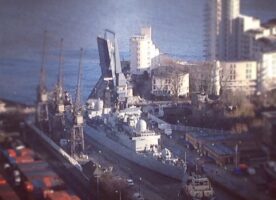 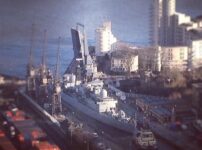 A press release from the Royal Navy that is worth highlighting – as the Royal Navy’s Type 42 destroyer, HMS Liverpool is in London for a few days – and the public will be let on board to have a…

Just up the road from where I live is St Anne’s Limehouse, a Hawksmoor Anglican Church that was consecrated in 1730, one of the twelve churches built through the 1711 Act of Parliament. The Church is significant for several reasons,… 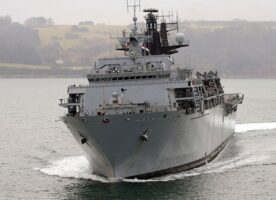 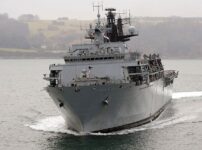 A note from the Royal Navy press office that the Royal Navy amphibious warship HMS Bulwark is taking a break from a busy training schedule to visit London and show off her helicopter and boats in action. The warship arrives… 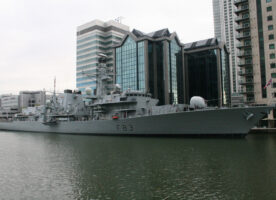 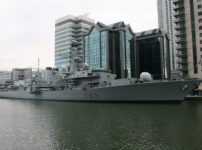 As I got slightly excited about earlier this week, the public are being allowed to go on board HMS St Albans for a look around the ship today. Guided tours for residents of its namesake, St Albans are taking place…

Public tours of a Royal Navy frigate this Saturday

For some reason, this didn’t appear on my normal tracking systems, so sorry for the short notice, but this Saturday there will be public tours of the Royal Navy frigate, HMS St Albans (F83), which is in London for a…

Another of the pre-booked tours for Open House Weekend were the guided tours of the Naval Club in the rarefied airs of Mayfair. The building itself is a notable example of early 18th century grand houses, and indeed, one of…

The second report on my tour of HMS Illustrious, this time with more words and fewer pictures. I was joined by four other fellow London Bloggers, and after meeting up and trying to watch the helicopter demonstration that was happening…

Wandered down towards Greenwich at lunchtime to watch the flyover of 20 helicopters over HMS Illustrious as part of the week’s celebrations. I actually stayed on the north side by Island Gardens as I hoped to get shots of helicopters…

After seeing photos of HMS Illustrious at Greenwich once before with fireworks, on a whim I just checked the PLA website, and they have a navigation warning that advises that there will be fireworks tonight (Thur 7th May). The barge…

A couple of photos of Lusty

I took loads of photos of the aircraft carrier, HMS Illustrious (Lusty) passing through the Thames Barrier, on her way down to Greenwich, but here is a quick couple that looked “not bad” on quick glance. I’ll fiddle with the…

A few months ago it was announced to those who track such things, that the aircraft carrier, HMS Illustrious would be spending a week in London in May as part of the 100th anniversary of the Navy’s air division. They…