See the Magnificent Maps of London

Maps are curious documents - they are often aesthetically pleasing to look at, and they convey useful information, but they are also often intensely political, defining boundaries and borders where power and ownership lay.

What would happen if you made some maps in an old fashioned style, but added modern buildings? This is what.

The British Library has released a huge archive of nearly 18,000 maps that have been digitised and are available for free - with no copyright restrictions.

A map of the trees of London

Ever wondered what that tree is you passed during your lockdown exercise walk? There's a website that tells you the answer.

Over 3,000 military maps, views and prints collected by King George III have been digitised and published online free to visit by the Royal Collection

A rare medieval map of London

A rare example of an exceptionally early map of late medieval London has been uncovered by a London antique maps dealer.

Another of those maps that will soak up a few hours randomly zooming around - a map of prehistoric to medieval archaeology under London.

Have you seen the Open Infrastructure Map?

Prepare to lose a lot of time just idly zooming around a map that shows major power cables and facilities not just in the UK, but world wide.

A new app and website have been launched and is encouraging people to record details of all the buildings around them.

A map of London, as it was during the era of the Tudor monarchs, give or take a few decades has been released by Layers of London.

In a dark corner of a museum can be found a large scale model of London's docks when they were a maze of warehouses and light railways.

An extraordinary map of London's railways, past and present has been updated recently and is proverbial catnip to any train or map geek. 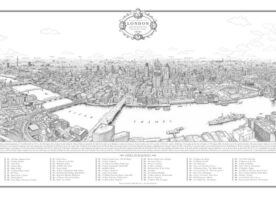 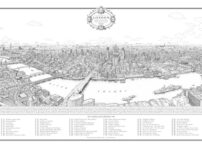 Hand-drawn panoramas of London taken from balloons were a staple diet of Victorian newspapers, and in the modern age, similar photos from up high can be equally captivating.

If you thought the animosity between North London and South London was a recent concept, then have a look at this map of London from 1787 which barely even notices that South London exists! OK, actually a map of Middlesex…

A Map of Westminster from 1593

Another small map to add to my collection – this time a reprint of a map by John Norden for Queen Elizabeth. Published originally in Speculum Britanniae in 1593 are considered to be the best representations known of the English…

Shop with olde maps in the window

Being quite a fan of old maps I was brought to a sudden halt when out yesterday evening as I passed an antique store which had a couple of very interesting old maps in their window display. Popping onto Google…