About the London Transport Museum

A museum devoted to the history of public transport in London.

From the early buses and trams, through to the world's first underground railway and up to modern times.

Numerous galleries showing objects from their collection, dotted around actual trains and buses.

There is usually a temporary exhibition or two running throughout the year.

£18.50  Hidden London: The Exhibition
Visit an 'abandoned' Tube station underworld and discover what secrets lurk beneath our busy streets in this Hidden London exhibition. 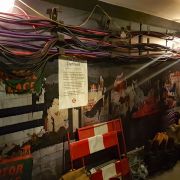 Tours of disused parts of the London Underground will resume in the New Year for the first time since March 2020, and tickets go on sale this coming Friday (3rd Dec).

Now you can drink from a London Underground moquette mug

On hold during the lockdown, the London Transport Museum is to restart tours of disused parts of the London Underground from next month.

A lot of moquette socks

The London Transport Museum has been selling transport moquette socks for a while, but now they’ve brought out a bumper pack of socks.

Over the next few weeks, the monthly late night opening at the London Transport Museum will be a weekly affair.

It probably feels like its been decades since many of us have travelled on the tube, and that effect will be magnified when you do, as there will be a vintage poster from 1931 appearing in the stations

With visits to the disused tube stations in person on hold, a new batch of video tours has been announced by the London Transport Museum.

The Acton Depot, where the London Transport Museum stores most of its trains, buses and ephemera is having a week-long Half-Term opening for families.

The London Transport Museum has released two more face mask collections. They’re proving popular with even the Mayor of London often spotted out and about wearing one of the museum’s masks at times.

The London Transport Museum is offering a “Black Friday” discount of 50 percent off their disused station tours which take visitors on a digital tour of subterranean London from the comfort of their sofas.

Just in time for that perennial Christmas present, a pair of socks, a new range of moquette socks has been launched by the London Transport Museum shop.

How London managed to keep its public transport networks running during wartime is the topic of a new permanent exhibition at the London Transport Museum.

Ten venues across London have received £22.3 million in government funding, as part of a wider £75 million funding package for the cultural sector.

The London Transport Museum has jumped on the bandwagon for fancy face masks and is selling London transport themed versions.

The London Transport Museum has announced that it is going to be opening later in the evenings every Thursday in September and October.

London tube map based on the stars in the skies

A variant on the classic London Underground tube map has been released, with all the stations renamed after astronomical objects and events.

The Acton depot which houses the bulk of the London Transport Museum’s collection could need to be rebuilt if plans to redevelop the site for housing go ahead.

Put a tube train’s treadplate in your doorway

Fancy stepping over the threshold of your home with a genuine London Underground door treadplate?

Colour in your own Moquette

You can now print off plain sheets of London Transport moquette and while away the hours colouring them in.

This is a limited edition coffee table from the London Transport Museum which will be going on sale in July, although you can pre-order it now.

The London Transport Museum’s overflow depot in Acton is only open a few weekends each year – but with the lockdown in place – they’re going online instead.

£17.50  Poster Girls - A century of art and design
With over 150 posters and original artworks on display, this exhibition recognises some of these forgotten design heroines and reveals the hidden stories behind their work.
2018-12-31
2019-01-13

£12  The Poster Prize for Illustration 2019: London Stories
An exhibition featuring 100 illustrations and celebrates one of the world’s greatest cities – London – revealing some of the fascinating tales of London life past and present.
2019-02-08
2019-07-14

£18  Untangling the Tracks
This exhibition traces the history of the Thameslink route from 1866 through to the recent £7bn modernisation programme which has transformed the route and untangled the tracks.
2019-05-24
2019-12-02