A room inside the Guildhall is currently filled with woodworking tools, as this year marks the 450th anniversary of the granting of a Royal Charter to one of the City of London's livery companies

This is today a wide-open alley covered at both ends leading off the banking heart of Lombard Street.

This is topical and nice, a special set of playing cards has been released as a charity fundraiser, with all the court cards as medical staff.

Long hidden behind other buildings, Stationers’ Hall is one of the largest and most opulent of City livery halls, and they now hold regular public tours.

Have you ever seen the Mercers’ Maidens around London

If you've ever seen them, you might think they're just old decoration, but many buildings in London are adorned with the bust of an anonymous woman.

Exhibition – 450th anniversary of the Tylers and Bricklayers

This year marks the 450th anniversary of Queen Elizabeth I granted a monopoly to the Worshipful Company of Tylers and Bricklayers to control the market in London.

Long hidden behind other buildings, Stationers' Hall is one of the largest and most opulent of City livery halls, and they've just started holding regular public tours. 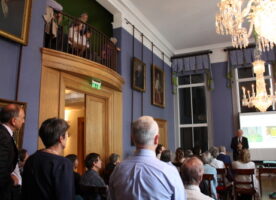 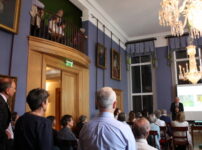 The History of Beeswax in London

As part of the soon to finish City of London Festival, there was a talk the other evening at the Wax Chandlers Hall all about their trade - bees and beeswax.

Beating the Bounds is an ancient custom still observed in many English parishes on Ascension Day – the 40th day after Easter – including, fortunately for me, a parish within the City of London. The roots of the tradition go… 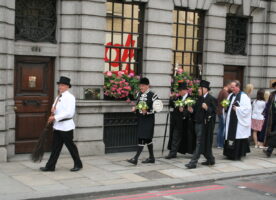 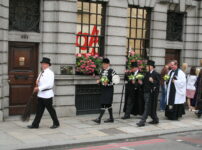 Another old City of London tradition occurred today as the Company of Vintners carried out their ancient procession to a local church following the inauguration of a new Master.

A Ripping Yarn of Silver and Salt

Not normally open to the public, the building does host a few exhibitions each year that are free for the public to visit, so this morning I wandered along to have a look at a silverware display focusing on that most common of table condiments - salt.