This large but at a glance seemingly ordinary church in Kensington has a wonderful feature -- a cloister like covered walkway to the entrance.

On a side street in Kensington can be found a large bronze petal slowly unfurling.

This narrow back lane in Kensington looks like a back passage for the houses that back onto it, but in fact, it predates the main roads around it.

The chapel of the Convent of the Assumption

In a posh Kensington square, what looks to be a classic Victorian Anglican church is actually a French Catholic convent. 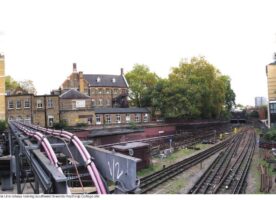 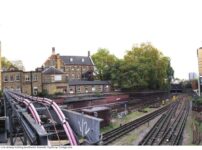 Developer wants to build over the tube tracks in Kensington

A section of railway in central London could be built over if plans for a major housing development are approved by Kensington and Chelsea Council.

A mysterious train runs between North and South London during the week, direct between two stations that shouldn't be possible to travel between. Once in the morning, and once in the afternoon - and never at weekends.

One hundred and fourty years of London Underground complaints

I have a small (and slowly growing) collection of old issues of the wondrous Illustrated London News. I originally started collecting them as sources for research, but I actually find they are quite wonderful to read (although sometimes I think…