About the Jewel Tower

The Jewel Tower is a 14th-century surviving element of the royal Palace of Westminster.

The small stone building sits opposite Parliament and has a modest display inside about its various history as royal wardrobe storage to housing imperial standards measures, and House of Lords archive.

Has a small cafe in the ground floor, which is basic, but useful in this part of town.

In a small grassy depression directly opposite the Houses of Parliament can be found a small stone tower, which happens to be a 14th century building that is open to the public as a small museum. 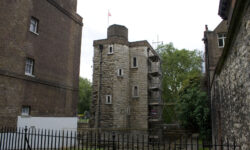