A series of huge vaulted cellars under a demolished mansion house just to the north of Heathrow Airport are to be opened up to the public as part of plans to improve the parklands around them.

Long before Heathrow was runways and hotels, it offered accommodation of a very different sort - an overnight prison cell right in the centre of the village. 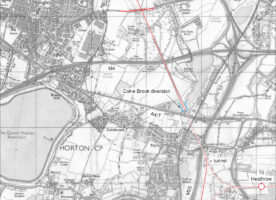 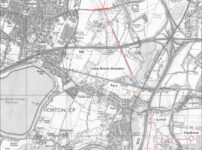 Unused station platforms could be opened for Heathrow rail link

Two unused platforms at an underground station could come into use, if a proposed new rail link to Heathrow Airport is approved.

As the new Terminal 2 prepares to open later this year, they have been carrying out tests with members of the general public pretending to be a passenger.

The Transport Museum is running another of their occasional vintage tube train trips next month, and managed to secure access down to Heathrow Airport again.

A purpose-built private "railway" carrying passengers from the Business car park direct to the Terminal Building, and rather than a conventional multi-carriage train, give each user/family their own private carriage.

Aircraft over London at night

Living in Docklands, I can lie in bed and watch planes going to/from City Airport, and if working in the living room watch planes heading towards Heathrow. So, I was quite interested to see that the chaps (and chapesses) over…

A380 starts regular flights to Heathrow

Reading in The Times today that the Airbus A380 is going to make its first commercial flight in and out of Heathrow on the afternoon of March 18th. Will I run over with my camera? You bet ya! Now, do…

Got back from lunch and noticed from the living room window that the London Eye is is randomly lighting up the passenger pods. As planes fly almost in a direct line over the London Eye when coming in to land…

A morning at Heathrow Terminal 5

I spent the morning pretending to be a passenger at Heathrow’s Terminal 5 so that they can test their services with “live people”. Today was apparently their first big test, with some 2,000 members of the public turning up to…