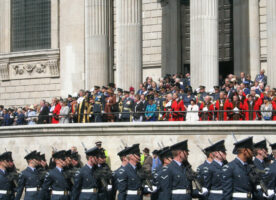 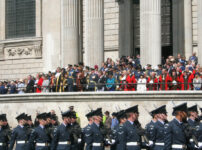 Military flypast over London on Friday

Look to the skies! This Friday lunchtime (13th March), there will be a military flypast over the centre of London.

Next week marks a significant military anniversary, and lots of military things will be happening along the Thames as a result. And details have finally been confirmed -- including public tours of HMS Illustrious.

Huge military fly past over Windsor Castle in May

As part of the Jubilee Celebrations, three days of events will be taking place at Windsor Castle, culminating in a Regal display on Saturday 19th May.

Military Flypasts over London in 2012

Details of military aircraft fly pasts over London during 2012 are starting to emerge, and I have the basic details from the Battle of Britain Memorial Flight below. Rather a lot of tbas in there at the moment, but the…

Military Flypasts over London (and surrounds)

Collating details as they are published of the various military aircraft flypasts over London and local area, as I do – and it is about as ready as it is likely to get. Apart from the big flypast in June…

An FYI – on Friday 26th June 2009, there is due to be a flypast over Tower Bridge sometime between 12-1pm as part of the London Armed Forces Day. I haven’t been able to confirm who is doing the flypast,…