Summertime now seems to mean watching a film at an outdoor location, so below is an almost certainly not a complete list of all the outdoor film screenings taking place in London this summer, but it’s probably not far off.

This coming Saturday (26th February), all Cineworld and Picturehouse cinemas are offering all film screenings for £3 all day long.

Tickets Alert: James Bond and Dune on IMAX at the Science Musem

Next month there will be a chance to see two current major movie hits at the Science Museum in their own IMAX cinema.

An American Werewolf in London with model tube station

It's undeniably stupidly expensive, but there's a limited edition of that famous werewolf movie being released, with a model of a tube station in the box set.

One weekend in June is seeing 200,000 free cinema tickets being offered by a range of small and independent cinemas.

Following a lengthy restoration, the Grade II listed Oxford House in Bethnal Green, London will be open to the public for a series of film screenings in its attic Chapel and Theatre.

Hollywood movie posters as you’ve never seen them before

Donald Pleasence and Christopher Lee on the London Underground

This Sunday, there's a chance to see 1970s London Underground with this classic horror movie set on the tube, staring Donald Pleasence and Christopher Lee. 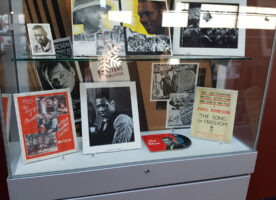 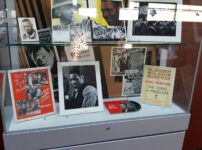 There's a space at the BFI which hosts small exhibitions to actors past, and at the moment, it's devoted to one of the movie world's earliest African-American stars, who was almost as well known for his socialist views.

A functioning church might not seem like the most obvious place to watch a horror movie about werewolves, and certainly not to drink alcohol in the pews, but that is the concept behind a series of cult film nights that…

London is probably the only place where people will sit on stone flooring, outdoors on a cold night and watch silent movies about transport 100 years ago – was roughly how last night’s event in Trafalgar Square was introduced to…

Imagine a movie that seemingly fuses Tim Burton at his most surreal, Disney’s Fantasia and generic 1950s American “mom and apple pie” movies into one package, and you get Dr. Seuss‘ The 5,000 Fingers of Dr. T. Last night I…

Wandered over to the Genesis Cinema in Mile End last night to see a showing of a lengthy documentary about Charles Dickens – specifically the places he lived in and how they influenced his writings. Narrated by Derek Jacobi, the…

There are a couple of free B&W movies being shown on a big screen this week which may interest you – and which interest me which is why I am going to them. Tuesday 21st Oct at 6:30pm – the…