About the The Charterhouse

An ancient monastery hidden behind high walls that was shut down by King Henry VIII, sold off, then donated to become an almshouse and school.

Although rarely opened to the public, a few years ago tours of the buildings started, and now a museum has also opened on the site.

The museum is open to the public, and now tours take place regularly through the week - either by tour guides, or you can be shown around by one of the residents of the almshouses which are still providing accommodation some 400 years after they were set up.

A chance to step into a medieval monastery near the Barbican on a Friday evening for a guided tour by flickering candlelight.

A chance to step into a medieval monastery near the Barbican on a Friday evening for a guided tour by flickering candlelight.

Just around the corner from the brutalist Barbican estate can be found a medieval monastery, with a recently restored Great Chamber that you can now visit.

This is a short covered passage that can be found next to The Charterhouse, a relatively hidden cluster of Tudor buildings that only recently opened to the public with a new museum.

Tours of the Charterhouse, a medieval monastry, resume in June

The Charterhouse, a seven-acre former monastery hidden behind high walls in Clerkenwell has confirmed that it will be resuming tours from Tuesday 1st June.

Hidden behind high walls near the Barbican can be found the last surviving Tudor Great Chamber in London, within the Charterhouse estate.

Sitting outside, but next to the museum, the newish museum inside the ancient Charterhouse on the edge of the city has turned a Georgian home into its new cafe.

Crossrail discovers a lost river and the Grains of Paradise

A lost river, only recently rediscovered has revealed some fascinating insights into daily life in Tudor London, including the exotic Grains of Paradise.

One of London’s oldest buildings has gained its youngest museum, based in a building that owes its existence to the Black Death. 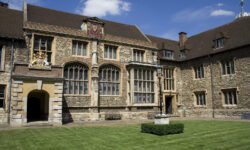 A new museum for London opens this month

Under planning for some years, a new museum is opening near to the Barbican later this month.

Hidden from common sight behind high stone walls on the edge of the City of London lies the Charterhouse, a private historical site that has rarely been open to the public.

Crossrail skeletons confirmed to have died of the Black Death

The discovery by Crossrail workers of skeletons near to the Barbican last year have been confirmed as being victims of the Black Death.

An exhibition has opened that can be looked as either an exhibition worth visiting to learn something, or a chance to go inside a building that has rarely been seen by the general public. Or maybe both?