There’s a museum in a telephone box

An old phone box outside the front of the British Museum has been turned into a miniature museum of its own - the Visionary Brit Museum.

This is a large secluded park that has several small entrances off residential roads, so unless you're exploring Bloomsbury's side streets it's very easy to not know it's here.

This is covered passage next to a beautifully restored Georgian house opposite Great Ormond Street hospital.

This concealed yard next to the British Museum looks as if it's been here for centuries, but in fact, Pied Bull Yard is barely 40 years old, or if you prefer, several hundred years old.

This is one of London's larger pocket parks, and also one of its oldest, at around 360 years old -- but it was only opened to the public in the 1950s.

Just down the road from the British Museum can be found the former home of Augustus Charles Pugin and his architect son Augustus Welby Northmore Pugin - best known for decorating the Houses of Parliament.

This short cul-de-sac leads off from Gower Street in central London, an area developed with upper middle-class homes, but now dominated by educational establishments.

Woburn Walk is a charming pedestrian street that is surprisingly found just opposite Euston Station.

Colonnade (sometimes Mews) is a narrow length of pleasing road that's rather well hidden despite being right next to a central London tube station.

As part of the Bloomsbury Festival, there's a chance to take in a behind the scenes tour of the grand hotel that dominates the area, the Principal London. 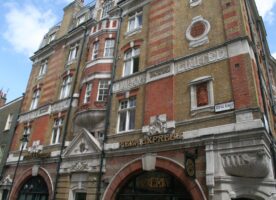 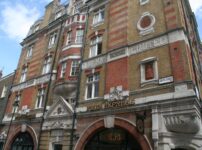 The Dairy Supply Company near the British Museum

Just around the corner from the British Museum is a building with a very distinctive architecture which usually causes people to stop and stare for a moment, even if only to wonder how a Pizza Express has ended up occupying what is proudly claimed to be an outpost of The Dairy Supply Company Limited.

This is Senate House – the administrative block of the University of London – famous in part for its modernist style and the sheer bulk of the main tower. And this is the view from the top of that 19…