Subways and tunnels under the City of London

I mentioned the other day that I recently acquired a copy of a City of London report into possible rebuilding plans for the City following the end of World War 2 and that it contains a lot of maps of the city, as it was in 1944.

They are quite large and stuck inside a hardback book so also therefore irritatingly difficult to scan in neatly.

Nonetheless, I have made a go with the map which most interested me – Plan Number 1B – more usefully titled, Existing Railways and Subways.

Interesting for me is that the Holborn service tunnels don’t seem to be marked to the West of Chancery Lane, although they are marked to the East of it. More research needed.

You may also notice the dotted green line – which is the second Post Office railway (the original pneumatic line not being marked on the map), although there seems to be an odd right angle length which I am not familiar with.

Notice also how the underground railways tend to follow the roads – that was to avoid paying wayleaving rights to the buildings above them.

In addition, there is the original City and South London Railway running to King William Street – later abandoned as the Northern Line was extended and improved.

Finally, if you know what you are looking at – notice how Tower Hill station seems to be in the wrong place. In fact that is the earlier Mark Lane tube station which was closed when Tower Hill was opened in 1967. 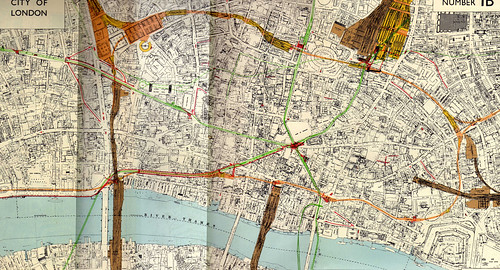 Other sizes – large and very large.