150 years ago a meat market opened on the edge of London to cater to its growing population. To mark the location a mighty clock tower was built. The meat market has long since vanished, and most of the land was swallowed up by London’s sprawling development, but the clock tower still remains.

Derelict, neglected, but much loved, there are plans to try and do “something” with it, but over the weekend, ahead of any renovation works was a chance to climb up to the top.

For up here, unimpeded by other buildings, are some stunning views of the City of London. 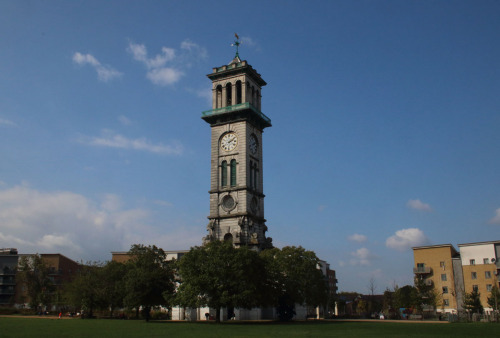 Tall buildings always appeal for the views they offer, but the tall buildings within London are a bit too close to the action. You can’t see the wood for the trees so to speak, so a high vantage point from outside the centre offers a much better vista of our city.

However unlike buildings designed to offer views to the public, clock towers were never meant to be so used, and as such the route to the top was for maintenance people used to perilous assents.

Seven floors to be ascended, started fairly decently with a classic Victorian spiral staircase leading to the first floor. 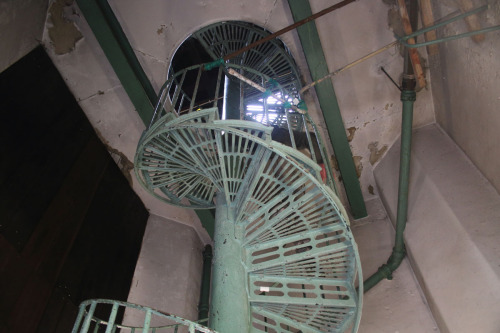 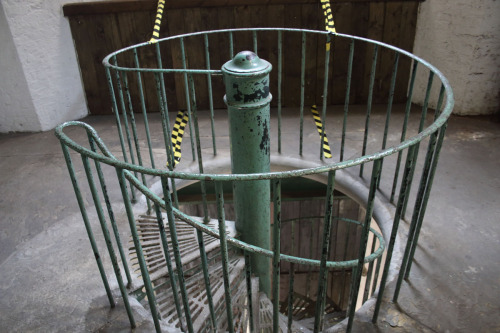 However, the rest of the way up was by a vertiginous wooden staircase, with just one handrail, and a rope on the other side. In fact, the rope made things feel even worse as you are climbing up next to a glass window, and the lack of wooden handrail added to the unreasonable fear of falling. 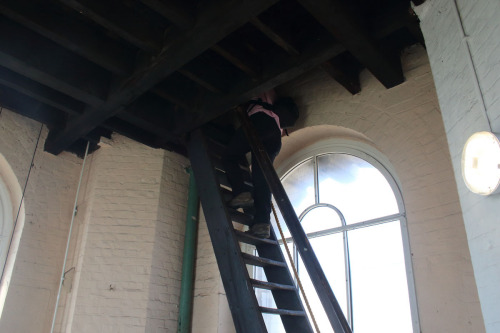 Most of the floors are wooden, but two were for some reason covered in stone paving. Nothing was ever stored here, as far as people can tell, so why the stone floor is a bit of mystery.

Half way up though, the great hidden wonder of the building is revealed — the huge clock mechanism. Still wound by hand every few days, the clock is in perfect working order. At the moment though they don’t chime the hours, as the clock is a 24 hour chiming model. 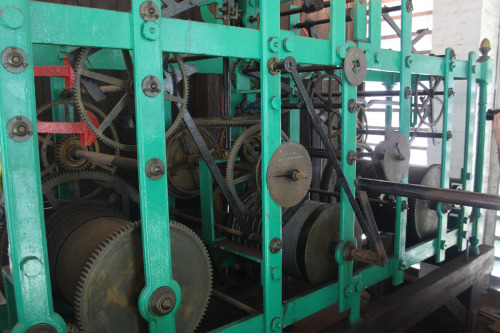 Twelve bongs at midnight might have disturbed animals in local fields when the tower was originally built, but today it would wake residents in the flats that encroach on the tower. Plans to resume the bongs will take place once they manage to disable the nighttime chimes.

Squeeze around the back of the clock for another steep climb up, to the clock faces themselves. Four faces, each powered by a single small gear box in the middle of the room. 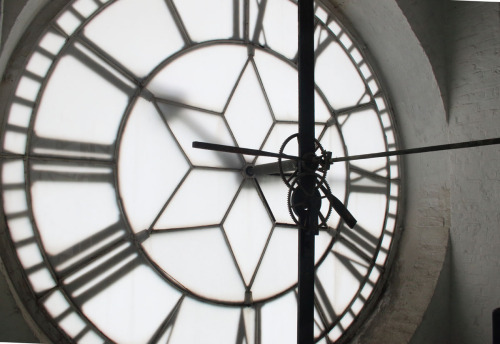 But yet another steep climb awaited, and this time probably the most scary of them all, as the top goes through a trap door with no handrail. Going up was OK, but descending later caused more than average levels of heart palpitations.

Still not at the top, but the final floor had a normal staircase in the middle of the tower.

And finally, the reward. 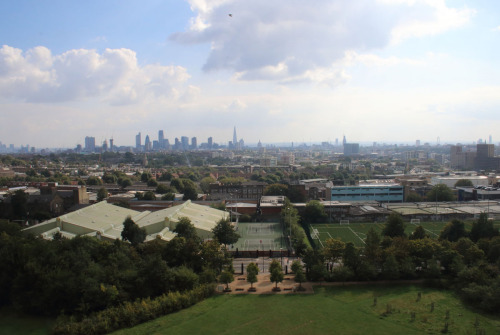 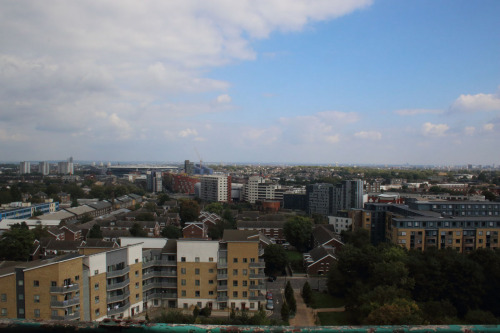 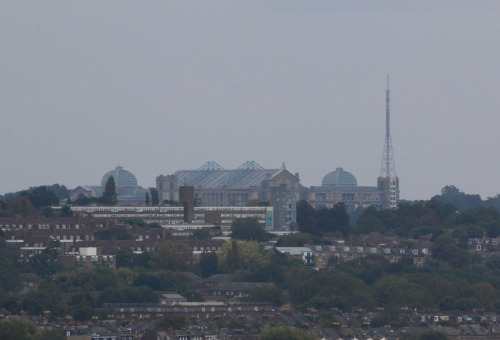 The balustrade around the top is sturdy, but far too low for modern safety regulations to let people up here for a wander around unescorted, so if they do manage to open up the tower, then that needs to be redesigned. 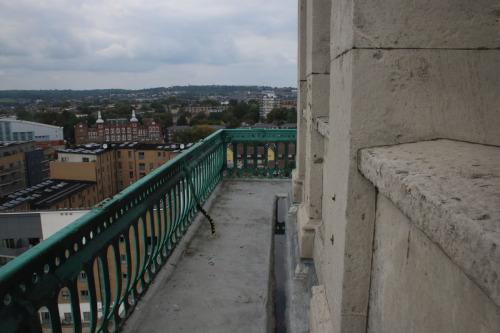 The huge bell and its quarter chimes are up here. And a chance to manually pull the wires to sound the quarter bells. I’ve often noticed that quarter chimes sound much louder up close than the hour bell thanks to their higher pitch. Certainly seems to be the case in the clock towers I have ascended before. 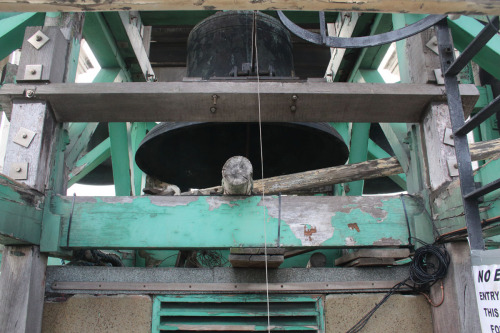 Seven stories up, and we aren’t actually at the top — there is one more floor above us, although no one was going up there. 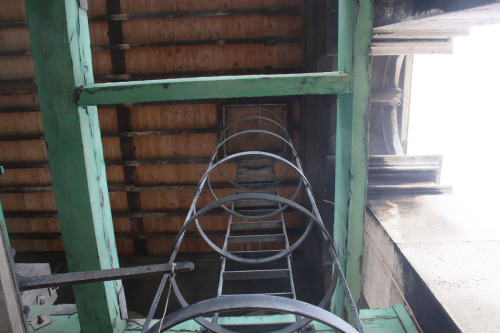 And if you peer over the edge of the low railings, the view down to the volunteers standing watch at the base of the tower. 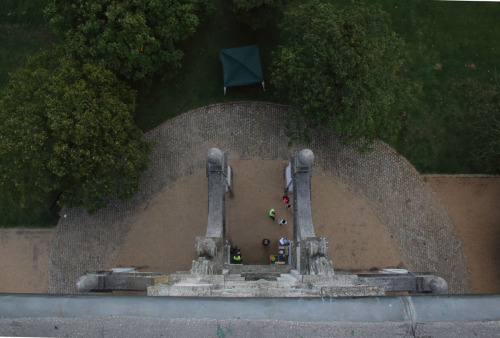 Also, the steep staircases, are terrifyingly rewarding to climb up, and may be retained, although the rope handrail will be replaced with something more reassuring, and the trapdoor up high probably improved upon. I ended up not using the handrails on the way down, having discovered that holding onto the backs of the steps, as if climbing down a ladder to be far more reassuring. Left me covered in muck though.

And plans to do something are being discussed. A consultation has opened with various options, and the Heritage Lottery Fund has contributed initial funding to assist with developing plans for a full lottery bid.

In addition to the tower, the park itself is a site of considerable political history, with many civil rights marches taking place here over the years. A heritage centre should be able to use the tower as a lure to visit, then educate visitors about the history of the park.

And maybe once more, the Cally Tower’s bells can toll the hours to local workers again.