Stephen Hawking’s office going on display at the Science Museum

Next month, just after Professor Stephen Hawking would have turned 80, the Science Museum will be opening a new display dedicated to the working life of the world-renowned theoretical physicist. The display will feature significant objects from Hawking’s office, providing insights into a scientist who challenged perceptions of theoretical physics with a playful, imaginative and social approach to work. 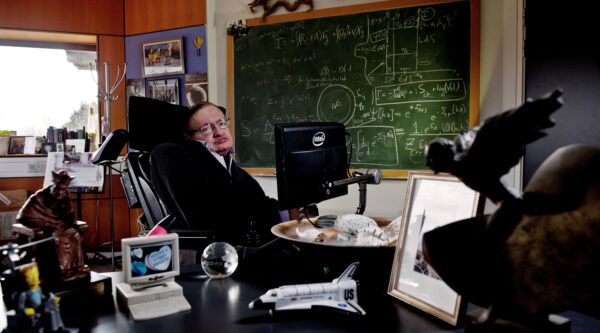 Professor Stephen Hawking in his office at the University of Cambridge, commissioned by the Science Museum Group in 2011 to mark Hawking’s 70th birthday (c) Sarah Lee

The Science Museum acquired the collection last year as part of a £4.2 million Acceptance in Lieu (AIL) agreement, which allowed his family to offset inheritance tax by donating gifts of equivalent value to the nation – rather than maybe having to sell them at auction, which could have seen them leave the country. His personal papers and documents will remain at Cambridge where he worked, while objects including his wheelchairs, speech synthesisers, and personal memorabilia were gifted to the Science Museum.

As a scientist, Hawking took a playful approach to collaboration. This is exemplified through one of Hawking’s most treasured possessions: a doodle-covered blackboard from the Superspace and Supergravity conference in 1980. Delegates covered the blackboard in equations, cartoons and jokes about each other. Hawking had this souvenir framed and hung in his office and now, forty years later, the Science Museum’s conservators have stabilised the chalk dust so it can continue to be enjoyed by those who see it.

Hawking’s sense of humour is further illustrated by one of his favourite pastimes, making bets with his peers on scientific debates. Perhaps the most famous is the Black Hole Information Paradox bet he made with Kip Thorne and John Preskill and visitors can see the wager Hawking signed with his thumbprint. 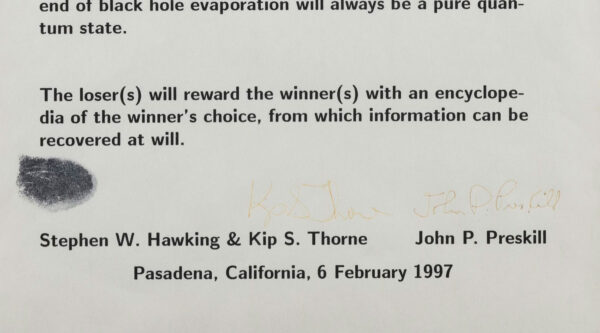 Bet made by Stephen Hawking and Kip Thorne with John Preskill, on whether information can be recovered from a black hole, 6 February 1997 (c) Science Museum Group

On display will be the latest generation of wheelchair used by Hawking: the Permobil F3 model. Jonathan Wood, Hawking’s graduate assistant, noted it was far more than just a wheelchair – it was also his voice, how he communicated his ideas to the world, his ventilation support and his mobile office.

Also on display will be Hawking’s rare PhD thesis, his spectacles adapted to aid communication and even an invitation to the time travellers’ party Hawking hosted. 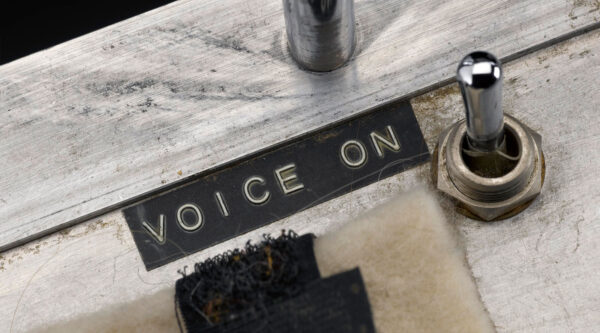 The exhibition opens on 10th February and will be free to visit – you will need to book a free ticket from here. The exhibition will then run at the Science Museum in London until 22nd June, after which it will go on tour to the Science Museum’s other venues, first to Manchester, then Bradford, York and Shildon over the next couple of years.