A press release from Network Rail the other day made me do a bit of a double-take and a bit of research.

The press release itself was nothing special, being a warning that a moribund, but never technically closed (echos of the Ghost Bus of West London Towne?) railway will start carrying freight trains again. It seems that as trains haven’t used the railway for years, it has become a popular spot for walking the dog. 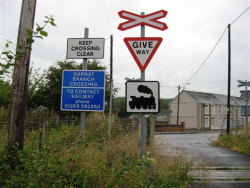 Anyhow, attached to the press release were a couple of photos – including this one of the railway crossing.

Blimey, I thought, is that a very old sign, or do we still use the image of a steam train to warn of a railway crossing?

A quick dig on the Highway Code website, and yes – we do still use the image of a steam train to warn people that they are approaching a railway, which is a bit quaint, but also quite anachronistic I feel. Shouldn’t the sign have been updated by now to reflect what trains look like today – or is the image of a steam train still holding onto its relevance thanks to the Harry Potter novels reminding the modern youth what trains used to look like?

Anyhow – while on the topic of steam trains, a sort of historic event will occur on Feb 7th (conveniently, a Saturday) – when the Tornado steam train makes its first visit to London. Specifically (and at the moment, provisionally) it will arrive at Kings Cross station at 2pm.

The Tornado, as you might have seen on the news, is the first steam train to be built in the UK for nearly 50 years, so expect a fair bit of excitement on the day.

I’ll be there, with camera – and probably triggering a hundred terrorist threat alerts for daring to want to take photos in a train station (ianvisits passim).