Space Station to fly over London over Christmas

Published 16 December 2014 by Events and Tours

Last year, the International Space Station flew over London on Christmas Eve, offering opportunities for parents to point at the bright fast moving “star” and tell bright eyed children that it was Santa heading out to deliver presents. 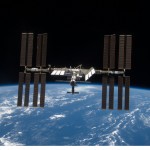 No such luck this year, although if you don’t mind stretching the truth a bit, Santa will be flying over London several times in the days ahead of xmas, maybe out getting some practice in.

More scientifically, while the space station is visible from London on xmas eve, it’s mostly flying over France, and while visible, it’s not that easy to see from the south-east of England.

However, the space station will be visible, and very noticeable as it flies right over London on the following dates:

…and finally on Xmas Day itself, not actually over London, but quite close, so still very bright, maybe Santa is on his way home at 4:33pm.

To see the space station

Head outside about 10 minutes before the flypast, and find somewhere modestly dark — a local park, or somewhere above the street lights, such as a balcony etc.

Face directly to the west and look about 30 degrees above the horizon and get used to the darkness.

About 2 minutes before the flypast overhead, you might start to see a bright fast moving star heading towards you and flying right over your head. It’s sufficiently different from local airport traffic that once you spot it, it becomes very noticeable.

Maybe you will want to give a wave to the astronauts as they fly overhead. Or maybe it was Santa in his sleigh.