South London railway disused for 100 years comes back to life

Just over 140 years ago, a short stretch of railway line was constructed in South London, but 40 years later it was closed due to a lack of passengers.

This coming Sunday, passengers will once again be able to travel along that disused Victorian railway line, as the London Overground completes its circumnavigation of London with the last phase of the East London Line extension.

There is a certain aptness in how the Phase 2 extension reused an old railway alignment, as much of the northern extension also reused old railway viaducts and routes.

This Sunday, the East London Line will gain a new length running from Surrey Quays station to Clapham Junction, and while most of it follows existing railway lines, TfL had one short spur of the track to build, and by a remarkable coincidence, it almost exactly followed the line of that earlier railway line.

The railway has been quite fortunate in this, as by pure chance, although the railway tracks had long since vanished, the route itself remained clear of any buildings. To one side sits a block of highrise council blocks, that have been slowly demolished and replaced with lower level versions over the past decade, and a plot of long empty industrial land is to be reused as stabling for the for longer 5-car trains that the railway hopes to order shortly.

I used to live in this area, for a short while and took a walk back a couple of weeks ago to see what has changed.

Surrey Quays — originally Deptford Road, then Surrey Docks — is much the same, save the application a couple of years back of the Overground livery to the decor. The station was renamed Surrey Quays following a lump of cash from the shopping centre opposite, and there has always been a lingering campaign to rename it as Surrey Docks once more.

I used to work in a shop in the shopping centre, and at least once a month we would get a phone call from someone asking what part of Surrey we were in. It hasn’t been part of Surrey since 1889.

Navigating the streets which are not at all pedestrian friendly, and have a one-way system which was routinely ignored by a police escort most mornings carrying high-security prisoners from Woolwich to the Old Bailey, I eventually found my way to the refurbished bridge that runs over the tracks, and gives an initial view of the new tracks. 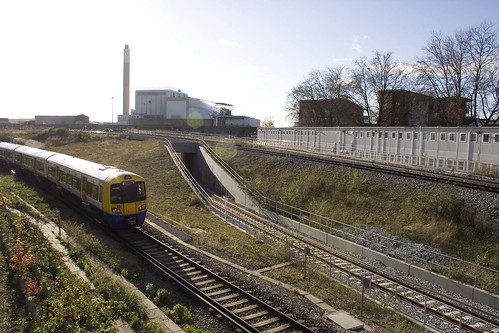 A flyover has been constructed to allow Northbound trains from the New Crosses to carry on uninterrupted, while the tunnel underneath offers the same convenience to southbound traffic heading towards Clapham Junction.

It is also about here that the old railway alignment starts, as well as the pedestrian footpath that follows the railway all the way down to Surrey Canal Road.

Not the most scenic of routes frankly, although a big banner heralds the arrival of a new rail service – or to warn residents that their peace and quiet is to vanish. 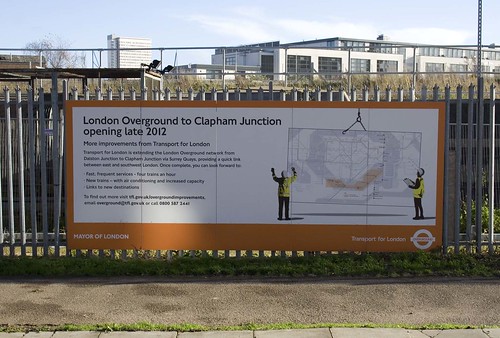 The most interesting area though is where the new railway passes through a series of brick arches that carry London’s oldest mainline railway service – between Greenwich and London Bridge, and another later line from London Bridge to Lewisham. 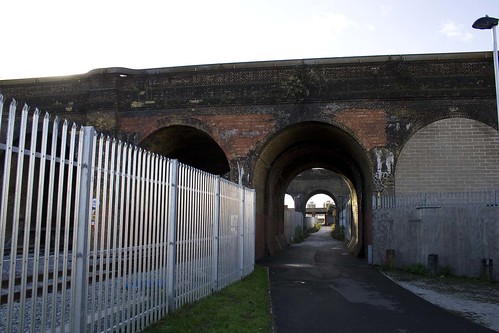 Nestled between them sits a local power plant that burns domestic waste to generate electricity, and whose odourless emissions were a constant source of conspiracy theories by local health worriers.

The area between the arches used to be open and wild, until a group of travellers made a home here for a few weeks and left behind enough rubbish to need several large skips to remove. Then they were fenced off.

They are still fenced off, but this time to stop people wandering onto railway tracks, but at least TfL’s budget included some plants which will grow up to cover the otherwise rather unsightly grey steel barriers.

More aesthetically pleasing though is the rest of the new line, which has been raised up on walls lined with a dark stone paving, picked out with detailing and some nice touches at the pavement.

It is also further along that we come to the site of one of the most controversial aspects of the extension – the site of a future station that will sit over the Surrey Canal Road. 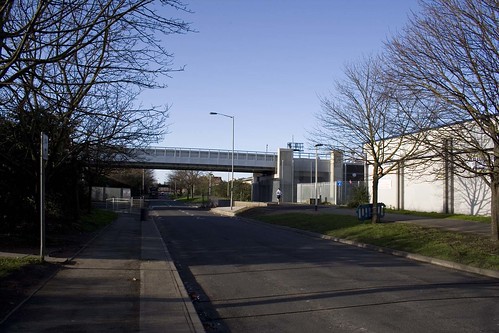 The saga of the funding, and lack of funding, then the intervention of a developer to pay the funding is better explained over here, but I personally have never fully understood the fuss.

Stations at South Bermondsey, New Cross Gate and Surrey Quays are all within walking distance. Without question, an extra station here would be nice for local residents, but to my mind it was more a “nice to have” than the “essential” that people tended to paint it as. As it is, TfL have agreed to build the railway bridge across the road with provision for later upgrade to a small DLR style unmanned station – and one which will likely be closed when the next door football stadium is playing matches.

The developers who plan to flatten the remains of the local light industry facilities and develop the area into residential will pick up the bill for the rest of the station.

Back to the railway.

This skirts around the modestly new housing estates built here in the mid-1990s and follows the original railway line on the far side of a raised mound known as Bridge House Meadows – the site of the former New Cross Stadium. 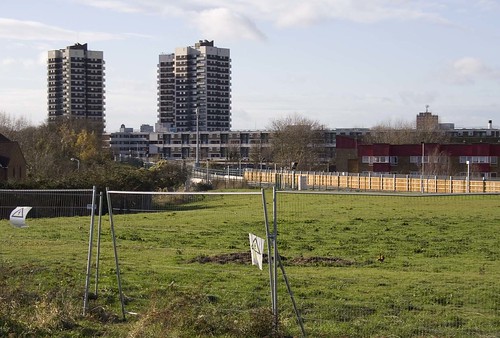 Those living next to the railway in old council blocks have new wooden baffles to deflect the sound, although that may end up making the trains more noticeable on the raised park, which is to get new trees planted in the still fenced off site.

Just to the south of here is where the new railway line links up with the existing tracks and runs down towards Old Kent Road and thence to Clapham Junction.

The area hasn’t changed a lot – still the same odd mix of Victorian, post-war and 1980s docklands inspired optimisim, but the planned redevelopment of the Surrey Canal Road could give the area a rude awakening. 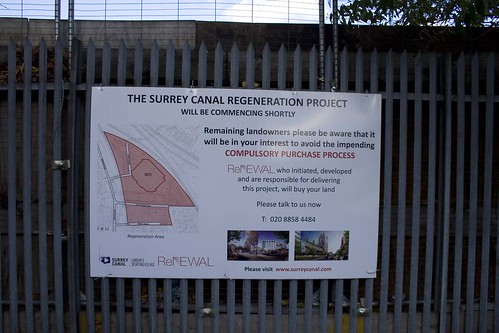 A pity there’s no way of turning the road back into a canal though.