The long running plans to upgrade South Kensington tube station took another step forward after BuckleyGrayYeoman was appointed by TfL to carry out a major upgrade of the station.

BuckleyGrayYeoman had already carried out a study of the development options before a consultation opened last year.

The plans are still subject to consultation, but the intention is that the ticket hall will be cleared up to reduce the horrendous bottleneck there, while the disused platform on the north side of the District and Circle line will come back into use.

In addition, BuckleyGrayYeoman will be responsible for the restoration of the shopfronts, improving the bullnose to provide a series of better spaces, the refurbishment of the active frontages on Pelham Street and providing new step-free access to the Exhibition Road subway from Thurloe Street.

Attempts to upgrade the station have been proposed several times since the late 1980s but have struggled to reconcile the cost of the upgrade being funded by over site developments and the vocal local lobby concerned by over development of the site. One exceptionally controversial proposal called for the demolition of the Victorian era shopping arcade entirely and a new round tower constructed instead.

The latest proposed plans will see the current central platform which serves both east and west-bound trains converted to serving just the westbound, while the disused platform will be brought back into use, to serve east-bound trains.

That separation means that there will be two staircases to the platforms, doubling capacity. However, the plans do indicate that eastbound passengers switching to the Piccadilly line would have to go up over tracks via a footbridge to get to the stairs down to the tube line. 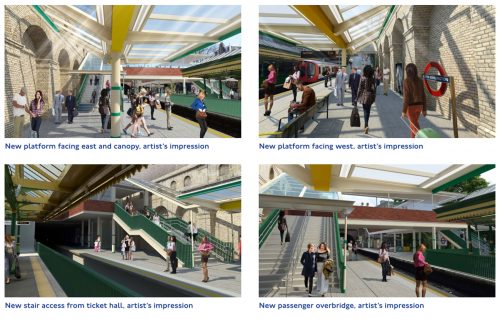 In addition, the ticket hall will be revamped to create more ticket-barrier side capacity, and make access to the museum foot-tunnel easier. That extra space comes, not entirely unsurprisingly in part from removing the now-disused ticket office.

It should see the number of ticket barriers — long a major constraint in the station — roughly double. 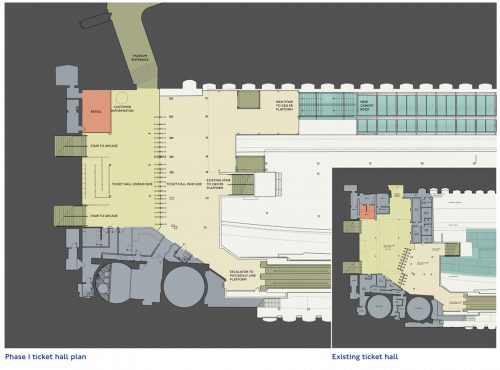 The north side shops would also see a new entrance to the station constructed which would make access to the District/Circle lines a bit faster if coming from the museums.

Naturally, this doesn’t come cheap, and the indicative plans also includes the construction of an extra floor of space above the current “bullnose” station entrance. Due to its placement over the tracks, the foundations wouldn’t have supported more than one more lightweight story being added, which is part of the reason for the abortive attempt in the 1990s to demolish the building and start again.

A row of new shops and homes would also be built on the south side, which is currently notable for the big stack of portacabins and scaffolding where the former platform used to be.

There will be a public exhibition about the plans later this year, with planning applications going in probably late next year.

In addition, it’s expected that Piccadilly line trains won’t be able to call at the station from early 2018 while all five escalators are replaced in one go. Once that work is out of the way, then work on the District and Circle line platforms can start, with everything finished by 2022.

The consultation website is here, and a load of background documents are here.

Incidentally, did you know there used to be a single dead-end railway track right in the middle of the main central platform — long since removed to make space for the Piccadilly line steps. And that the pedestrian tunnel under the platforms is the remains of a cancelled high-speed tube train service.