A set of somewhat garish looking new buildings and sitting right in front of them rather incongruously, a small collection of old cottages. (map link) 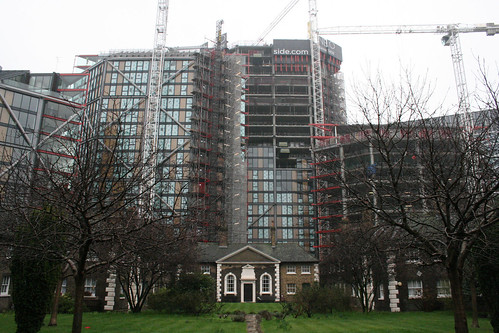 Frankly, a set of old cottages would look out of place almost anywhere around this part of town, but the looming presence of the gaudy steel towers towering over them is particularly out of scale. The cottages are a truly old relic of Southwark though – and can be dated back to 1752 as the result of a charitable trust set up by the – presumed wealthy – fishmonger, Charles Hopton.

Hopton does not appear to have married (raises an eyebrow) nor did he seemingly live in Southwark, but when he died in 1731 he left the bulk of his estate to his sister, and on her death it was to pass to trustees for the establishment of almshouses. A total of 26 poor men were admitted, and in addition to being housed, they received a chaldron of coals and a payment of not less than £6 a year. A chaldron was roughly equal to what a horse and cart could carry.

Apart from a small expansion in 1825, the estate was largely untouched until some Germans dropped a bomb or three on the place, destroying four cottages and damaging three more. The rebuilding took the “opportunity” to build a communal kitchen and common-room.

The almshouse charity now caters for men who have lived or worked in Southwark for 3 years and their wives – and still inhabits the same plot of land it has been on for over 250 years.

1 Pings/Trackbacks for "Some old almshouses behind the Tate Modern"