Published 24 December 2012 by By Ian Mansfield Events and Tours

London’s 800-year old meat market at Smithfield usually opens at 3am and usually closes by 7am as the city is overtaken by people more suited to city work than butchering — but on Christmas Eve one butchers holds a very special event more suited to the average punter.

At 10:30am Harts opens for the annual Chritmas Eve auction which has taken place for over 100 years to help clear out the last of the stocks that wouldn’t last in prime condition until the new year.

Those in the know have been coming here for years, and thanks to a BBC2 documentary earlier this year, those in the know are more numerous, which probably doubled the size of the crowd. One old couple walking up muttered in disgust at how many people were there this year. 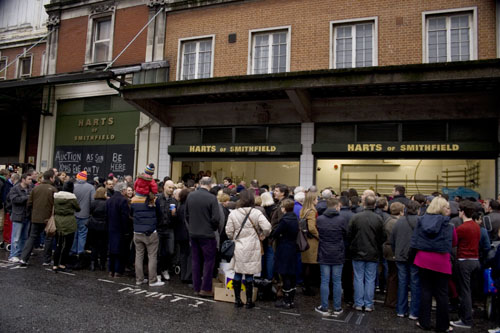 The rules are fairly simple.

The butchers parade a haunch of meat and call for a price to be set leading to cries of tenna, twen’y or other suitable multiples of ten pound notes. 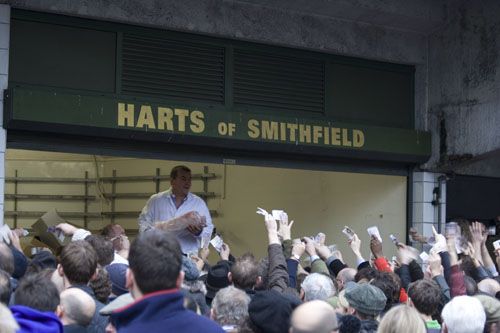 Not dissimilar to “crowd surfing” at music concerts, here handfuls of cash are passed forwards, and hunks of meat passed back. There is a considerable amount of trust as you hand over money to strangers in front, who in turn pass it on until it reaches the front, then you wait for the meat to be passed back again.

More experienced buyers turn up in teams with one squeezing to the front to do the buying, and then pass back sacks of red flesh to waiting friends and family who pile their bargains up on the street behind not unlike castles of  meat on the tarmac. 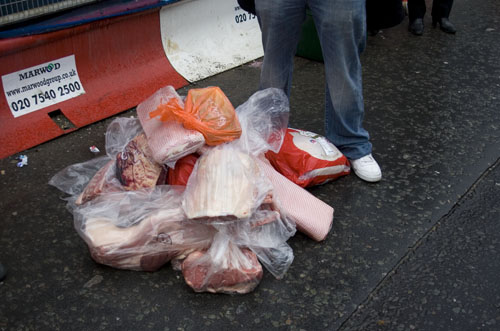 Those at the front also act not just as buyers, but as intermediaries with those behind – it’s a very good natured affair and if you aren’t buying, you help others to get their cash across, and purchases back.

There was dark rumour that a couple of people had walked off without paying, which seemed to be doubly annoying not just because the goods on offer were so cheap, but because it spoilt the trust in the event. 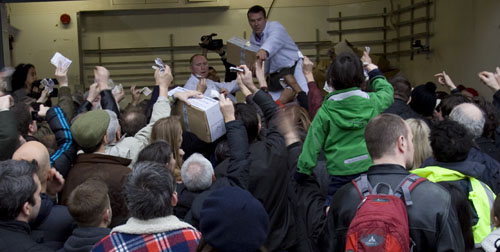 Sometimes an item would be offered on the toss of a coin. Win and it was free. One lady near the front seemed to do exceptionally well as every 15 minutes or so her distinctive scream could be heard as she won more and more as the morning wore on. To the evident delight of the rest of the family standing at the back of the crowd.

Some turned up to collect just one thing, anything that was cheap while others were there to fill a freezer back home. I must admit that some of the meats on offer looked far too good to be frozen, but even a family would struggle to eat half a leg of pork without doing something to preserve the surplus.

And those were the average sizes – no daintily bags that can be weighed in grams, everything is in multiple kilos.

One of the last auctions had the crowd go wild as huge slabs of beef on the bone were shown for all to see with the pronouncement that this sold for £100 in butchers – and Waitrose sells a single slice for £38. Growls and boos greeted this news, although many seemed to be carrying Waitrose carrier bags. They sold the lot at £40 a hunk.

A suckling pig was held up and offered as the finale.

This wasn’t just a chance to stock up on cheap supplies in a season of usually fiscal excess, but the atmosphere is fantastic. We all want a bargain, but no one begrudges losing out to a rival. Well, not too much.

And sadly that was the end of another annual auction. We were exhorted to return next year as they can only do this so long as people turn up.

I think its future is assured though.

In case you are wondering, once I put my camera away, I came home with a foot and a half of bacon. That’s three months of bacon sarnies… for a tenner.