Six things to see in Guildford

A mere thirty minutes or so out of Waterloo lies the ancient town of Guildford, which owes its early heritage to the wool trade and its convenient location, and today rather more to its proximity to London.

As an old and rich town, it has quite a lot of heritage to see, and quite a lot of it sits right on the vertiginous high street. As pretty as the high street is, getting to it from the railway station isn’t that well signposted and not that pretty either – but once there, the tourist centre was easy to find half way up the hill – and where I collected a ticket for a tower tour of the main church almost opposite. A tower tour of another church was not available due to a lack of volunteers on the day.

The Holy Trinity Church was one of the three medieval parishes in Guildford, and the current Grade 1 listed building, dating from 1763, is the largest Georgian church in Surrey. Tower tours were at set times and after waiting for a while at the base of the tower some poked her head around and said I should just go up when I want. Up a spiral stone staircase, past what looked like a private living room and up to the bell ringing room. Laid out as so many are, with lots of signs around commemorating special events, such as the 3.5 hour ringing to mark the end of WW2 – with 5040 changes. The changes being the terminology used in bell ringing, and being also the most that are possible with the 7 bells above without repeating any of them. 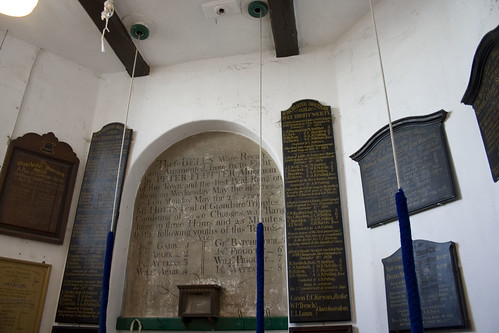 The vicar was giving a talk to the small group up there already on how bell ringing is carried out, but upwards was the goal for me, to see the clock within the tower and then abandoning stone stairs for a slightly shaky wooden ladder up to the belfry itself.

Apart from looking at things, not a lot else to do, and as we were the last tour of the day things were closed up as we descended, and they were able to reconnect the clock to the bells to ring out the hours once again.

Directly opposite the church sits Abbot’s Hospital, which was founded by the then Archbishop of Canterbury just under 400 years ago. Built right at the end of the Elizabethan age in a traditional design which was just being superseded by the neo-classical look, and it was a huge building at the time. 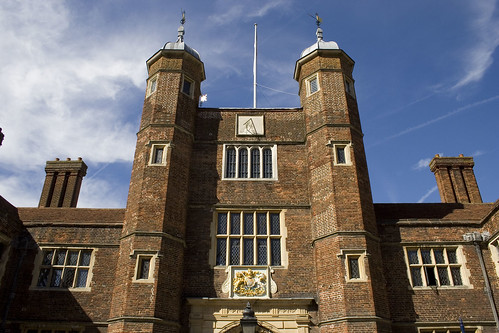 As a place of rest for elderly paupers of the town, it still provides lodging and a meagre income for 26 residents, who until 1984 had to be single. They now allow married couples in. As with any building of the age, there is a chapel, and residents were required to attend 2-hour sermons twice per day, or pay a fine. Even illness was no excuse. Oh, and they stood throughout the service. The pews in there today are from the church opposite in 1740.

My visit was timely as the stained glass windows are about to be removed for conservation work. 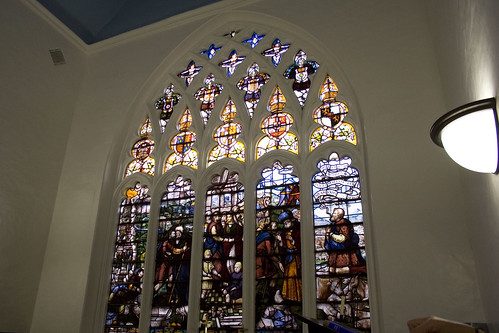 Next to the chapel is the main dining room, with original 400 year old benches and tables. Two doors, one for men from outside where they were expected to work in the small farm plot, and a separate door for the ladies, who worked  — as you might suspect — in the kitchen.

The Hospital itself only started offering tours fairly recently, so what lay behind the great oak doors on the high street had been a mystery to the residents for hundreds of years. As such it was also the only place I went into that I chose to wait in order to get a look around.

Heading downhill again, this time down the high street can be found The Guildhall, which is unmissable not because of the building, which is not out of place here, but because of the gigantic clock that hangs from the front.

Sadly, at the time of visit, most of the back is being repaired, so the main chamber on the ground floor had been cleared and all the wall decorations covered in protective bubble wrap. The “judges chairs” were still looking down on the visitors though. Upstairs, via creaking staircase which speaks of ages past rather than shaky foundations is the main reception room – and a chance to go onto the balcony for a great view of the high street and to get up close to that clock. 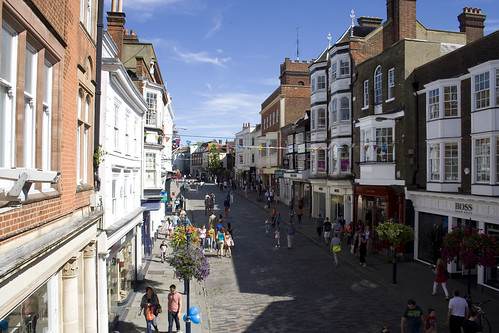 Just seven people on the balcony at a time though – it isn’t that strong – a warning which resulted in most people going back inside when numbers exceeded four. Like most buildings of its sort, the walls are lined with portraits of the great and good of the town, and a slightly idealistic painting of the Queen. Oh, and robes hanging on a rail next to the silver gilt plate and mace. 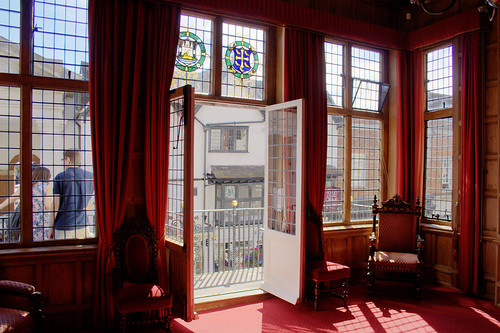 Not much further down is the undercroft. Not an undercroft, but THE undercroft. The one remaining such structures of probably four built along the high street and out of local limestone. Any such construction would have been immensely expensive at the time, and it is thought it was a shop of some sort – probably for wine, which would have been a rare drink for most. 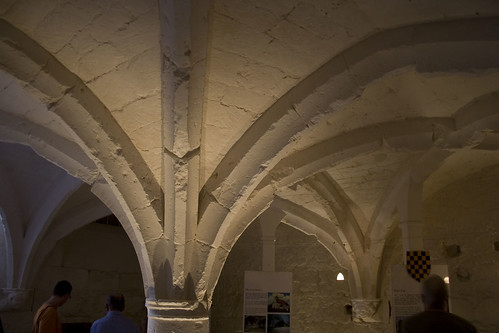 As usual, a number of display boards explain the history, and a local guide filled in some gaps – such as the fact that limewash and some steel reinforcing bars aside, the undercroft has never been restored. A building of that age which was left alone by the romantic Victorians is quite a rare thing indeed.

A very useful model shows how the shop would have been under the house on the high street – at a time when shops wouldn’t be using stupidly expensive glass to display their wares. 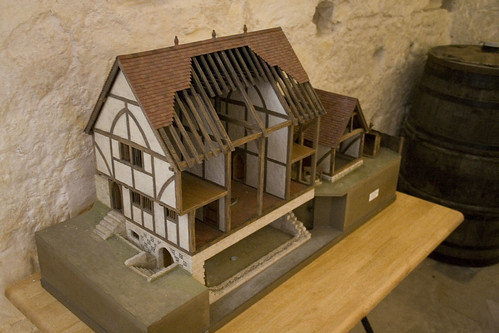 If you cross over to the John Lewis department store and past the ladies spraying perfume at people, head right to the top to the cafe. Up here is a sizeable roof garden, and on nice days, you can sit outside on a patio that runs around it overlooking the outskirts of the town and the slightly dated garden itself.

Another place to get a quite good view of the town though is the multi-story car park which is behind the Sainsbury’s and therefore surprisingly close to the High Street – and right next to the Holy Trinity Church.

From here, the Guildford Cathedral can be seen to dominate the local landscape. On my visit to the town, they were offering a chance to climb the tower, but I had neglected to book a ticket for that. Damn! 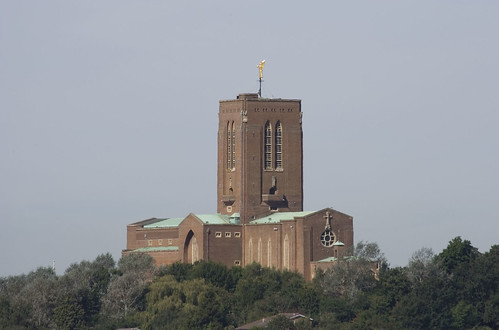 Something else you can climb most days though is the remains of the local castle. Only the central keep remains, and sadly the view is from within a small metal cage at the top of the stairs. While the castle looked lovely, and the grounds around it are a well kept garden, I declined the half-hour wait to ascend to the top of the keep. 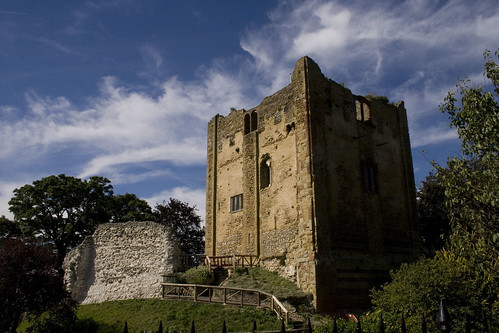 The wait was lengthy as this was Heritage Open Days weekend and the castle was free to visit, resulting in a lot of people having a look inside. It also meant the cashier in the ground floor tourist shop had nothing to do and looked utterly bored to tears when I had a wander around the accessible floors.

A final stop, just around the corner is St Mary’s Church – a glorious flint building that is widely thought to be the oldest surviving building in Guildford. It is almost certainly the original church of the town. It is also the one that cancelled the tower tours. 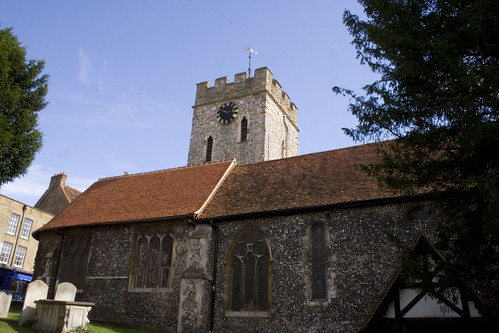 The present stone tower in the middle of the church was built between 950 and 1100, and the church enlarged in stages until about 1300 – then apart from the roof replacement and other minor issues, it has remained the same ever since. While from the outside this looks like it will be a conventional, if old church, the interior has a remarkable layout.

Thanks to that rather haphazard construction, the floor of the church slopes quite noticeably and the main aisle has a number of steps between three level floors. While the pews are level, several benches in the arches are set at quite uncomfortable slopes. 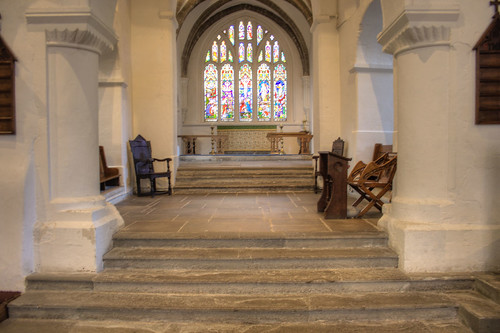 The tower wasn’t open, but the tea room at the back was, and this is still very much a functioning church and community centre.

I visited on a Saturday when the venues were open for Heritage Open Days, but tower tours aside, they are all open during the summer months anyway – but rarely on Saturdays.

The Guildhall tours take place every Tuesday and Thursday at 2pm and 3pm.

The churches are open at conventional times – although the tower tours were special event.

1 Pings/Trackbacks for "Six things to see in Guildford"