Published 1 June 2014 by By Ian Mansfield Events and Tours, Museums

The Avro Vulcan was the UK’s cold war bomber and apart from the US spy planes, probably the most distinctive aircraft of its era with its massive delta wing design. 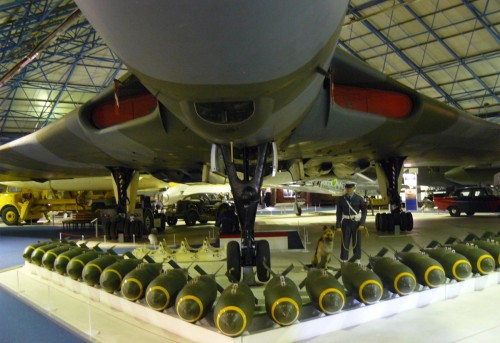 Although designed as a nuclear bomber, its sole combat role was the famous flight down to the Falklands to bomb the airport.

While of militarily dubious practical use, the attack demonstrated UK resolve in retaking the islands, so had enormous propaganda benefits.

Also, the sheer difficulty of flying half way across the planet has rightly gone down as one of the great aeronautic accomplishments.

The planes were mothballed following the end of the cold war, and while one is still flying, and another might be restored to flight, the rest are in museums, including one in London.

The bomber in the RAF Museum is now open for access on the last Wednesday of the month, although June has already sold out, and there are only a few slots left for July.

Clamber up the two ladders, through the cabin and into the cockpit where one of the museum aircraft team will talk you through every nook and cranny of the flight deck.