Simon Jenkins on the English Church

I found a rather curious little series on Channel 4 a few weeks ago and recently finished watching the last of the six half-hour episodes.

It’s about English Churches, but broken down into historical chunks and while focusing mainly on the architecture, that is then set into the context of the period being talked about.

Anything of that nature on telly is likely to appeal, but this programme is just a little bit odd.

What makes it such a curious little series is the presentation style by the host, Simon Jenkins, who coincidentally just happened to have a book out at the time the programme was made.

He seems somewhat stilted in style, almost as if reading sonorously from a script he didn’t quite write himself. While that sounds like a criticism, it is actually quite relaxing to the ear. 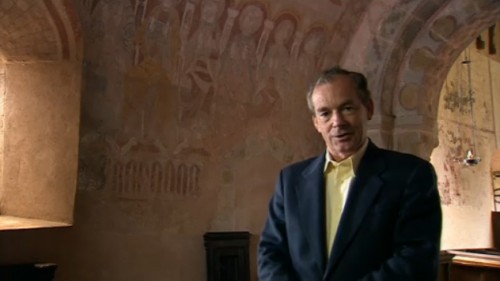 None of the stern glares from David Starkey or Simon Sharma wandering around fields looking earnest — just a solitary figure musing on a building in a slightly detached academic manner.

From early Saxon influences at Gunwalloe in Cornwall and Brixworth in Northamptonshire to the Norman carvings at Kilpeck in Herefordshire, he reveals the earliest church designs.

At South Newington in Oxfordshire and Stone in Kent, murals and decorated gothic carvings reveal how the cults of Thomas a Becket and the Holy Virgin influenced the decoration of Medieval churches, while the charnel house beneath Hythe in Kent shows how the church struggled to retain authority as Plague ravaged the land.

The sponsorship of a new mercantile class was to provide the perpendicular splendours of Cullompton in Devon, while both Langley Marish in Berkshire and Wensley in North Yorkshire feature private booths for the squires and dukes. Whitby in North Yorkshire provides a snapshot of Georgian social history, with the pew rents on the best seats affordable only to a select few.

It’s oddly enjoyable to watch — and worth doing so with a notepad nearby as some of the churches are worth a visit.

The series is on 4OD