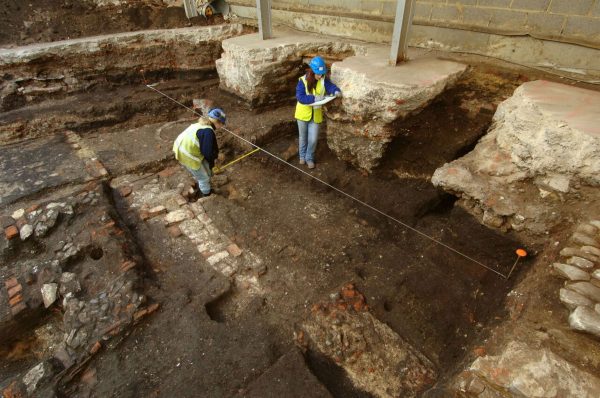 The Theatre — for that was its name at a time when it was the only one — was originally discovered by archaeologists from MOLA back in 2008. At the time they reported finding a polygonal structure they believed to be the remains of the north-eastern corner of The Theatre. Archaeologists from MOLA are back on site now, conducting new excavations on the site in preparation for a new development which will include a public exhibition space.

The remains of The Theatre will now be put on display and visitors will be able to see the yard where Shakespeare performed 400 years ago.

Its location in the heart of Shoreditch was chosen for being outside the City of London, and their control over the plays performed. A boisterous location that was apt for the decadent performance of plays. Shakespearean playhouses were melting pots of society and whilst the interior seating arrangements reflected the everyday class divides, theatregoers from across the social spectrum gathered outside to eat and drink and mingle before a performance.

The recent archaeological excavations are exploring small pockets of these outside areas, and it is hoped that this ongoing research will reveal new insight and artefacts that will eventually be displayed in the exhibition.

Heather Knight, Lead Archaeologist said: “It’s incredible to be back on site at The Theatre, it’s an internationally significant and iconic archaeological site and a really special place for archaeologists, historians, thespians and Londoners but especially for Shoreditch, London’s first theatreland. It was the discovery of The Theatre that gave Hackney its first Scheduled Ancient Monument, hopefully this dig will bring more amazing discoveries to light.” 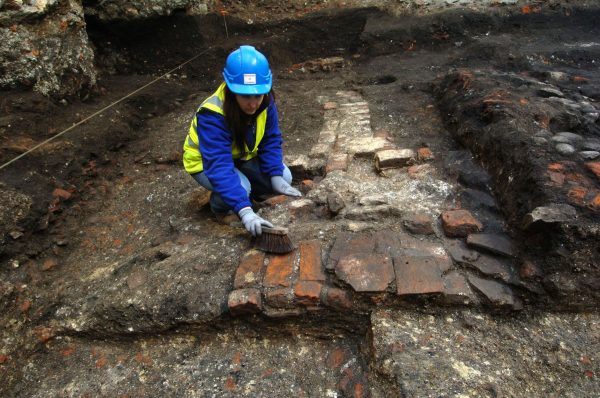 The Theatre was built in 1576 when Shakespeare was only 12 years old, but he later went on to perform there after arriving in London as a young man and have some of his most iconic plays staged there, including Romeo and Juliet.

In the mid-1590’s, when Shakespeare was the resident playwright at The Theatre, he was in his late 20’s or early 30’s. In 1598, having lost the right to lease the land in a bitter dispute with the landlord, Shakespeare’s Company covertly dismantled the theatre building on the night of 28 December 1598 and put it into storage. The following spring, they moved the timbers across the river and used them to set up a theatre in a new location in Southwark — which was to become the famous Globe Threatre, which opened in 1599.

Had that landlord been less difficult and the theatre remained, then Shoreditch today could well be more famous for its bard than its beards.

The remains of The Theatre’s inner wall were originally discovered in 2008. Key finds uncovered included a complete Elizabethan goblet, a unique fragment of pottery depicting a well-dressed bearded man which is the only one of its kind ever found and pieces of the money pots used to collect entry fees, evidence that playhouses were commercial entertainment venues.

These artefacts and the archaeological remains of The Theatre will be visible to the public and displayed alongside 16th century objects on loan from institutions across London.

The new museum space is due to open next year.