She who must be obeyed

Published 28 May 2010 by By Ian Mansfield Events and Tours, Museums

Last night while various London notables were over at the Museum of London celebrating the launch of their new gallery, I was in a somewhat older museum sitting on hard plastic seats watching a DVD film.

As part of their occasional series of showing vaguely Egyptian themed horror movies, the Petrie Museum had dug out the film, She, with teenage fantasy actress, Ursula Andress. Being a Hammer film, it comes with the usual cast of Christopher Lee and Peter Cushing. 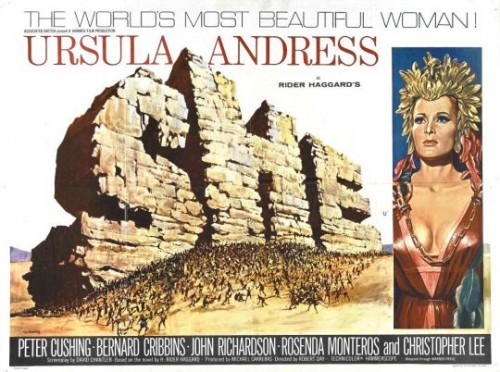 The film was released in April 1965 and did moderately well, until a few months later, when Ursula Andress finally accepted the Playboy shilling and posed naked for their publication. Unsurprisingly, interest in the film soared shortly afterwards.

By Hammer Horror standards, this is not a bad film and has a few notable moments, especially the scene of Peter Cushing cavorting with half naked dancers.

The film was introduced by the museum’s resident film geek and Egyptologist who gave a background into its filming in Israel, and some of the Egyptian themes that can be ascertained from the film.

Thereafter, it’s lights off and watch the film, while trying not to giggle too loudly at the really dire moments. As before with the Petrie museum, they go for atmosphere rather than quality – hence the hard plastic seating. However, unlike most venues, this is shown inside the museum itself.

The experience of watching a Hammer film, while surrounded by stacks of ancient Egyptian pots and statues is certainly unique in my experience.

The film had an official advisor, Andrew Low to help make the Egyptian parts seem at least vaguely plausible, although it was noted that his track record was poor, and had originally been a stage-hand. Quite how the stage hand ended up as an advisor is uncertain, and no record of an academic career to support his position has ever been found.

One aspect I noticed was that She wore a feather dress when in public. Whether this was a totally mistaken reference to the garb of Assyrian priests and kings, who would have died out a thousand years before She was presumed to have been born, or just a bit of sexy costume I am unsure. 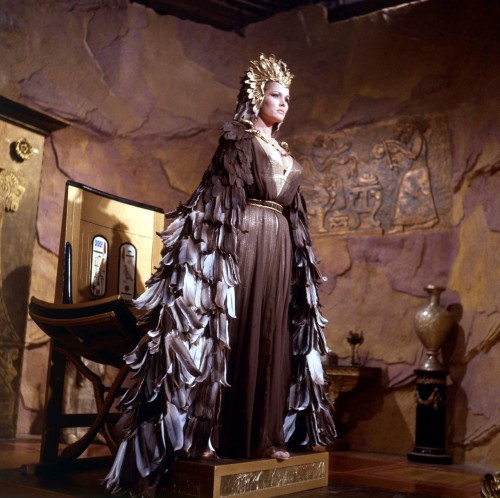 Overall, another fine night at the Petrie.

They host a couple of these evenings a year now, and you sort of need to be on their mailing list to know about them, but getting onto the mailing list isn’t obvious. The best way is simply to attend one of their other events and fill in the “what did you think of us” form.

There are two events coming up shortly, which need booking and have a few places left (as of last night). Both are guided walks:

Out and About: Egyptian Factories in London

An Obelisk on the Thames

Also, if you fancy wandering round their lovely old museum with a glass of wine in hand, then there is an opening evening next week:

Lates at the Petrie: Alternate Sexualities in Ancient Egypt