See the views from the top of a church clock tower

150 years ago, a large church was built in farmland on the outskirts of London, and all because of the railways. 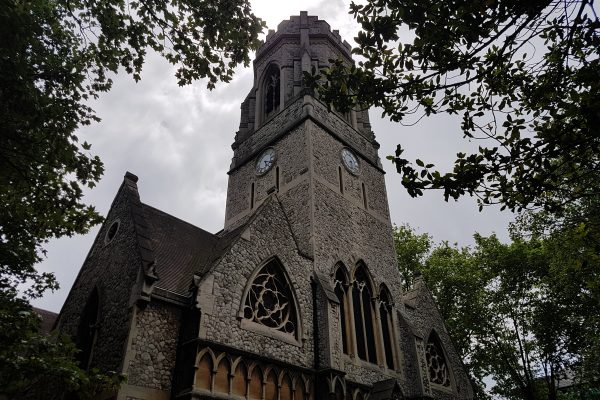 Not from the railway, but from the houses they would build on their farm to serve commuters into the city.

Two local farmers, William Wickham Drake and Anne Tyrwhitt Drake leased their land to housing developers, and up popped a lot of grand houses for the middle-classes seeking to escape the pollution of London.

Even in those times, you couldn’t build a new town without facilities, and while today we want schools and doctors, the Victorians wanted churches. Big grand churches for big grand congregations. 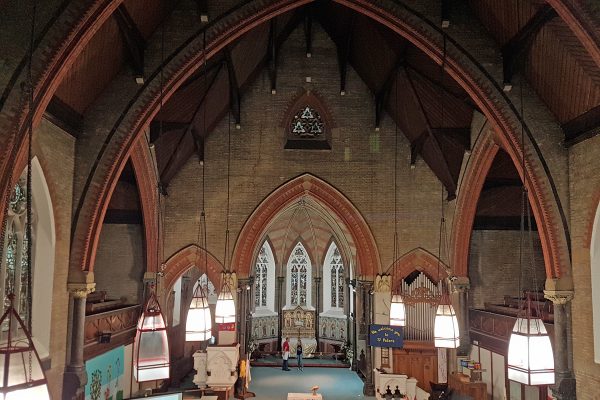 In 1866, William Wickham donated £2,000 and a plot of land, which coincidentally happened to be the site of a 12th century Premonstratensian Order priory, although they didn’t know that at the time.

Up popped a church which was in use by 1868, but the tower followed several years later when enough money had been raised. Today the church is still very active, a new vicar arrives in a couple of weeks time, and they held an open day with a chance to climb up the tower.

A quick tour of the church itself, including the former practice room for the choir which isn’t often used these days, and pointing out two large sets of galleries that were built for the expected growth in parish size. To save money, they planned to add the stairs later, but never have, so they remain unused to this day.

Of course, what everyone was here for was the tower tour.

Like most church towers of any age, they weren’t designed as a tourist attraction, and I can only presume that a requirement of working in a church was to be quite short but also have a good head for heights.

Access to the tower was via a very low corridor which cuts through the stone work of the tower, then it’s all the way up on increasingly steep ladders. 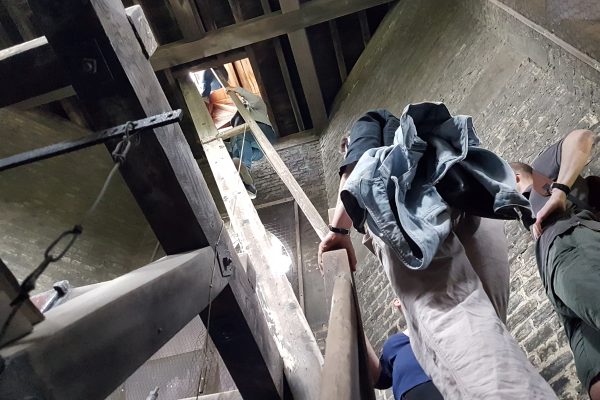 Do stop part way up to admire the clock mechanism, which is currently not working and they’d love to restore, and get the bells ringing the hours (during the daytime) once more.

But up another flight of steep wooden steps, and a chance to see the clock faces from the side that people rarely see – oh do avoid the trapdoor, and wait your turn for the more hair raising climb to come.

Two very steep wooden — it’s wrong to call them stairs, as by now they are more like steep ladders — and at the very top nothing much to hang on to, so as you’re blown a bit by the wind, haul yourself up over the edge and onto the roof.

Don’t think too much about how on earth you get back down again.

For up here the views are spectacular, and far better than I had expected. From the ground level the old trees do so much to obscure the tower that I wondered if they would be reaching high enough to ruin the views.

They are not, and you peer down at the tree canopies as much as you gaze far across London, to the city, to the North Downs, to Crystal Palace and docklands.

The guide was comparing some old photos and trying to work out how they were taken for a comparison with modern views. The rest of us just gawped and stared, and pondered the return journey back down the stairs.

Going back being a case of carefully maneuvering yourself back onto the steps, then gingerly going down holding onto the very dusty steps to stop falling backwards as your feet fumble for each step below.

At ground level, a bowl of water and towels to wipe the dust of ages off hands, and by coincidence, placed most appropriately for the message on the stained glass window. 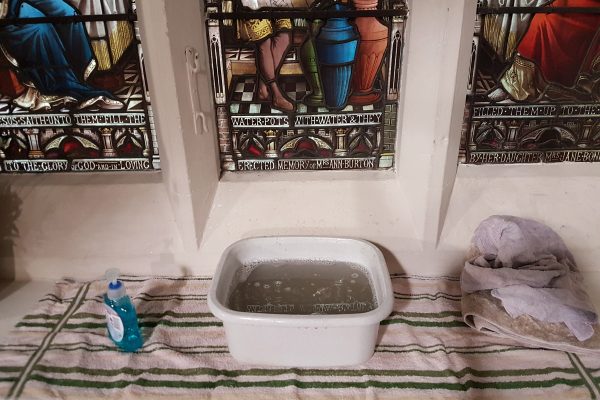 While not quite the scariest climb I’ve ever done in a clock tower, it’s in the top five.

Which only goes to make the views at the top even more special, and the achievement even more rewarding. A cup of coffee and cake from the church kitchen gave wobbly legs a chance to calm down. 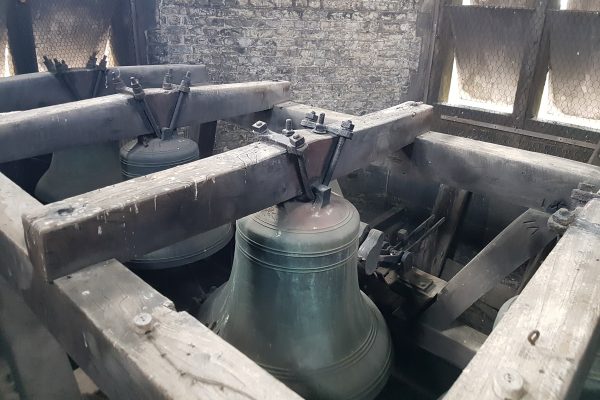 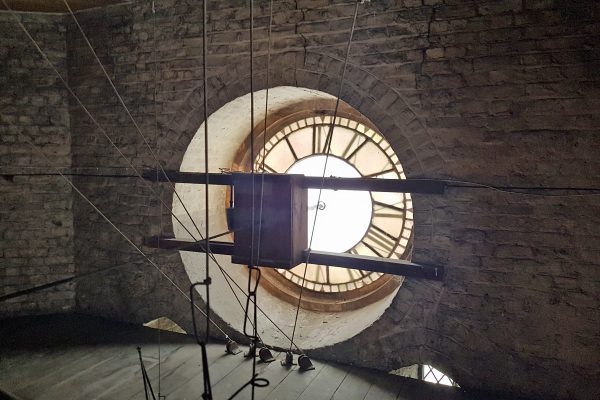 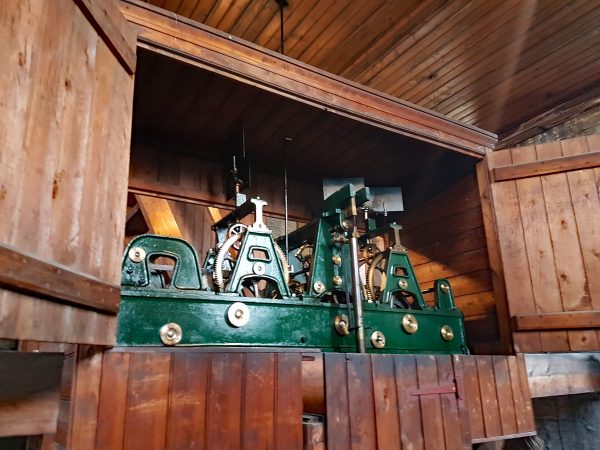 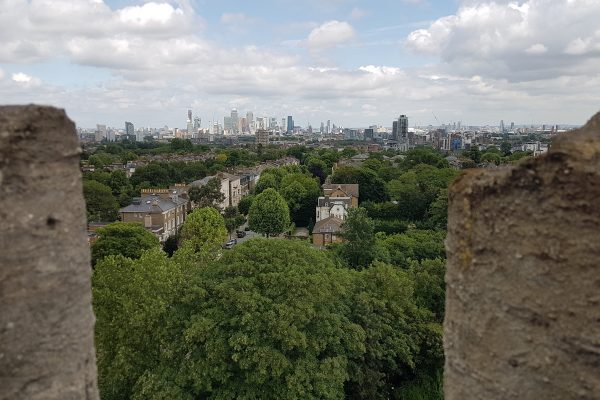 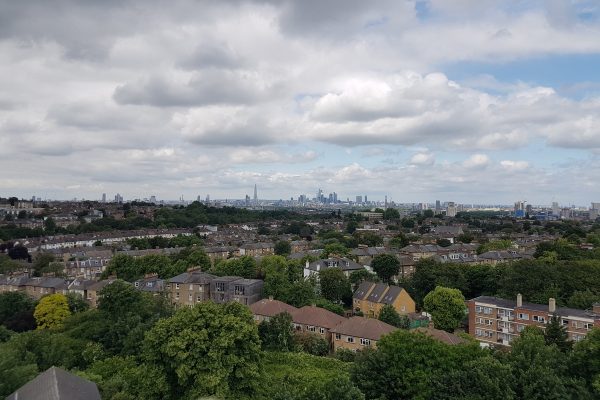 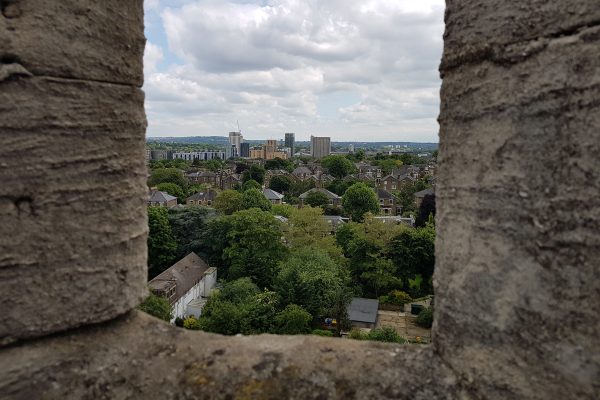 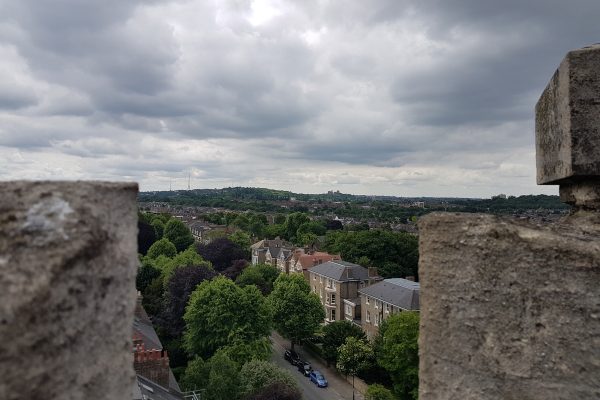 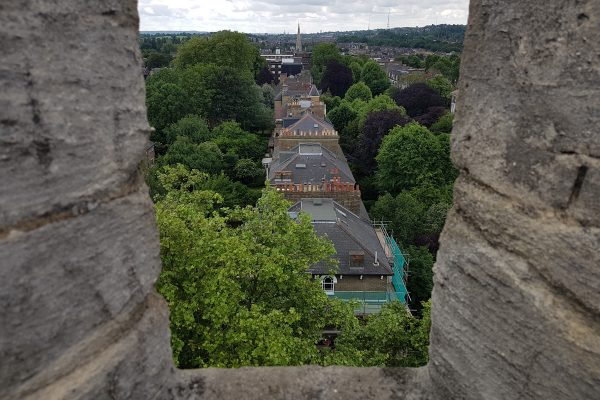 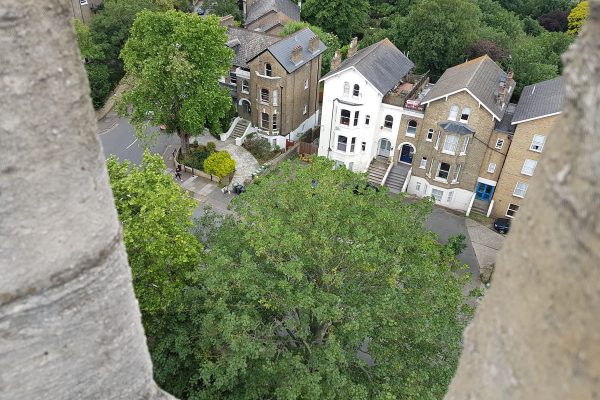