Hidden behind a rather small easy to ignore door in a high imposing wall next to Buckingham Palace can be found a large collection of regal bling.

This is in fact the Royal Mews, where the horses and carriages are kept in store for when they are needed to provide a bit of pomp and ceremony — which is surprisingly often.

The Royal Mews at Buckingham Palace evolved from the King’s Mews, which were originally just to the north of Trafalgar Square and were originally to house royal hawks. The name ‘mews’ derives from the word ‘mew’, meaning moulting, as the birds were confined there at moulting time. The building was destroyed by fire in 1534 and rebuilt as stables, but they kept the name, so stables are now known as mews, even though the hawks have long since flown the nest.

The current Royal Mews is however at the back of Buckingham Palace, behind that high stone wall that surrounds the palace’s back gardens. Today the horseless carriage does most of the work, so there are rather fewer horses in the mews, so it’s open to the public to go in and have a look.

Some of the former stables now house the State Carriages that are dragged out for regal events, each in their own box with a display board explaining their heritage. 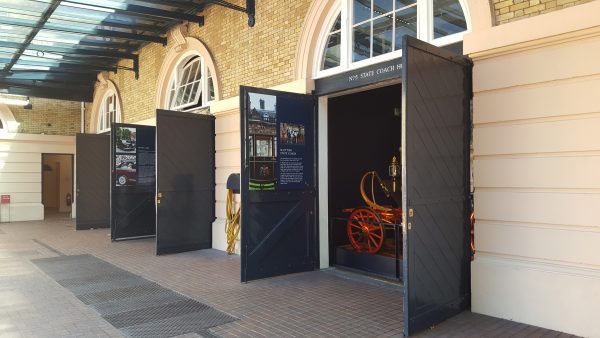 Most of the carriages here are of the landau type, either a State Landau or Semi-State Landau. The difference being that the semi-versions are driven by a rider on the horses, rather than on a box on the carriage itself.

Despite their seemingly reduced bling, the semi-state carriages are preferred for regal duties as the occupant of the carriage is easier to see if the driver isn’t in the way.

It’s favoured by the Queen, because unlike most, this one comes with decent suspension. It’s also a living vessel of British heritage, with the wood coming from a range of sources, such as a piece of HMS Victory and numerous cathedrals. A chuck of the Stone of Scone is under the seat in a “time capsule” with copies of the Magna Carta and Domesday Book.

Elsewhere there’s one carriage that is only used on exceptionally rare occasions, the Gold State Coach. 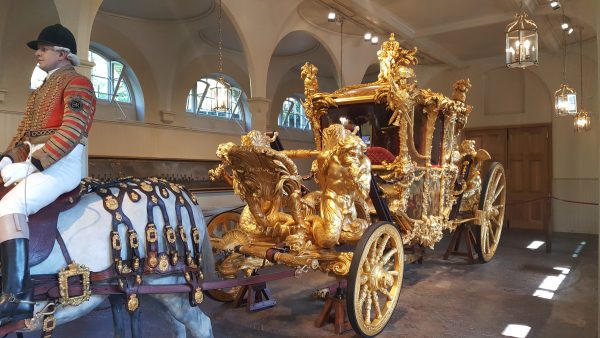 Commissioned for the Coronation of King George III, it was late, so he didn’t get his bling-tastic journey to Westminster Abbey, but it has been used for every Coronation since.

It’s not used often in part because it is horrific to ride in, being akin to being in a ship on stormy seas. The sight of the monarch staggering out and being sea sick being something to be avoided.

It’s also a pain to get out of the room it’s currently stored in, taking around 2 days and needing the dismantling of the side wall which hides the double doors it can pass through.

Elsewhere are the horses, and their training grounds. Most carriages are pulled by Cleveland Bays, but the monarch’s coaches are always pulled by Windsor Grey horses, and with one exception anyone else who wants to use those horses has to ask The Queen for permission first.

The only other person allowed to borrow the Queen’s horses without permission is Father Christmas, who has his own sleigh in the stables and visits annually to hand out presents to the staff. 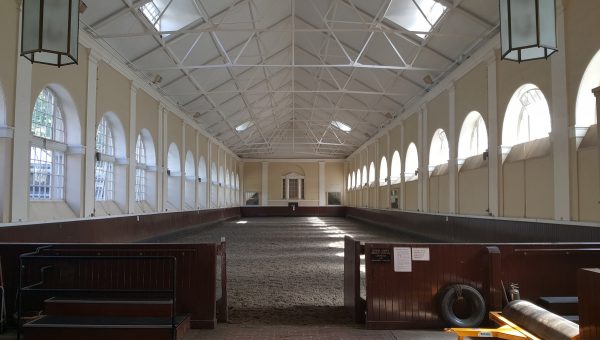 Although we think of the carriages as being used by the Royal Family on ceremonial occasions, they are out and about the streets quite regularly, as foreign ambassadors presenting their credentials to The Queen are brought to the Palace in one of the coaches.

It’s quite a nice treat for the Ambassador, and with a lot of countries to deal with, there’s a steady stream of visitors throughout the year needing to borrow a coach for the visit.

The Royal Mews is open most days, except when there’s a big ceremonial event taking place. Entry is £10, which also gets you unlimited visits for a year.