Published 17 October 2019 by By Ian Mansfield Events and Tours, Museums

The Admonitions of the Instructress to the Court Ladies is a Chinese scroll thought to be one of, if not the, oldest such document in the world and is around 1,500 years old. 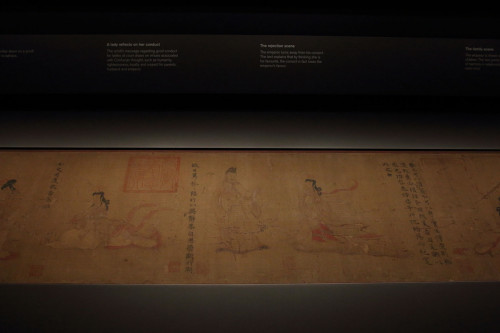 The one in the museum is probably a copy of an earlier scroll, and it was composed, they think, to reprimand Empress Jia and to provide advice to the women in the imperial court. The painting illustrates this text with scenes depicting anecdotes about exemplary behaviour of historical palace ladies, as well as with more general scenes showing aspects of life as a palace lady.

In that sense, its an earlier version of the sorts of guides to domestic bliss that have perpetually instructed ladies how to behave, how to maintain a good home, and how to be a good wife — or in this case, Empress.

Before its arrival at the British Museum in 1903, the scroll passed through many hands. The history of the painting can be ascertained through the seals and inscriptions, beginning with the eighth-century seal of the Hongwen guan, a division of the Han-lin Academy.

The painting was subsequently in the collections of well-known connoisseurs who added their own seals and inscriptions, before ending up in the imperial collection during the reign of the Qianlong emperor (1736-96).

In 1899, during the aftermath of the Boxer Rebellion, the painting was acquired by an officer in the British Indian Army who sold it to the British Museum.

Due to its age, and the way the painting was made, it can only be exposed to light for a few weeks each year — and normally sits in a room with other documents, but with the lid firmly sealed shut.

But at the moment, the lid has been lifted, and a chance to see this exceptionally rare document — in the flesh — now exists. 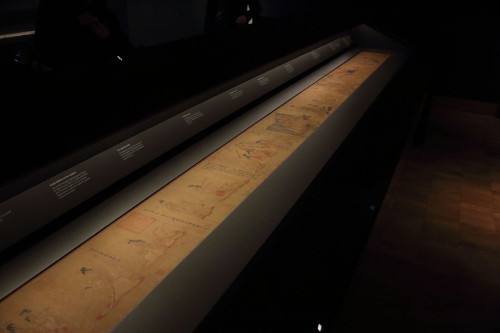 It’s split into two documents, thanks to the acts of a previous owner, which does incidentally make it easier to view now as it is in two separate glass cases. On my visit, most of the visitors to this small room in a dim corner of the museum were obviously visitors from Asia, with one chap spending most of his time looking at it through the screen of a mobile phone rather than directly experiencing the scroll for himself. 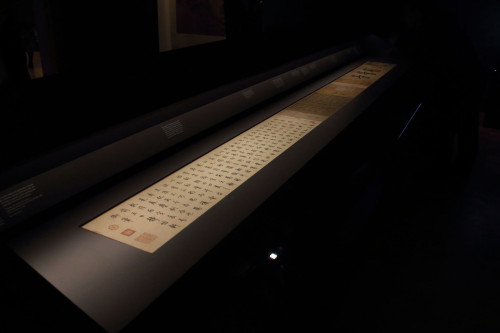 You can stand in the presence of the Admonitions Scroll between 14 October – 24 November 2019. It’s in the British Museum in Room 91a