A set of drawings made nearly 200 years ago for the Thames Tunnel at Rotherhithe can been put up for sale by the descendants of the Brunels who designed the tunnel.

The Thames Tunnel, which today carries the London Overground trains, was the first large scale underwater tunnel in the world, and called the 8th wonder of the world when it opened.

However, construction was fraught with problems and it took 18 years to build, instead of the 3 years originally expected.

The drawings made before, and during construction are going under the hammer at Bonhams auction house next month, and are estimated to sell for between £50,000 and £100,000.

Marc Isambard Brunel presented a set of drawings of the shield to the Institute of Civil Engineers in 1837, for which he received their Silver Medal. The archive for sale at Bonhams, however, is more comprehensive, and contains a wealth of other material, including his initial rough sketches for the shield.

The reason for the need for the tunnel can be seen in one of the drawings — which shows a very heavily congested River Thames packed full of shipping. It was claimed that it could take hours to get from one side to the other by barge because of the huge amount of congestion. A tunnel was proposed as the solution. 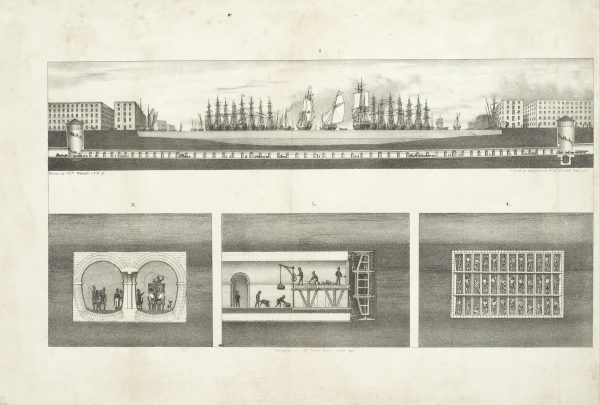 The Brunel’s weren’t the first to try to dig a tunnel under the Thames, but it was Marc Brunel, father of the famous Isambard Kingdom Brunel, who invented the original tunneling shield which made it possible to dig large tunnels — and in theory without the walls collapsing during construction. 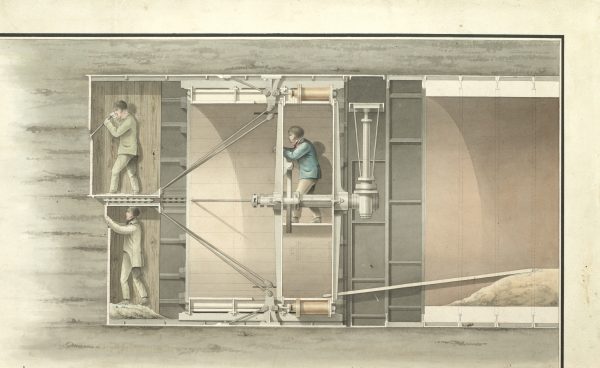 Construction started in 1825, by constructing what were intended to be just short-term shafts. Huge metal rings pushed down into the ground by having ever higher walls of bricks built up on top, and the soil dug out underneath. 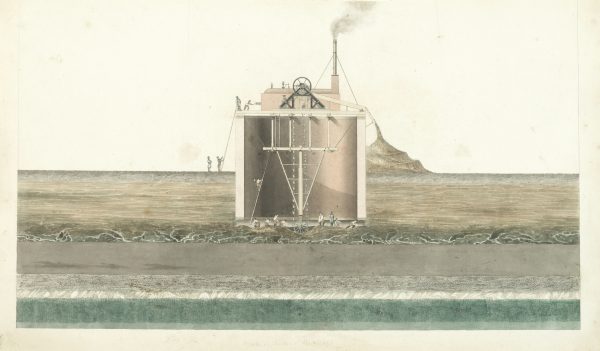 Once deep enough, Brunel’s famous tunneling shield came out and started the perilous crossing under the Thames.

Although it was supposed to make tunneling safer, there were constant problems, and most catastrophically, in May 1827 when the Thames broke through and flooded the tunnel, killing 6 men.

The tunnel was sealed off and abandoned, and it wasn’t until the government stepped in to fund the works that they resumed in 1834, and the tunnel finally opened to pedestrian traffic in 1843.

One of the drawings show what was never built though — the two massive shafts a bit further away from the river, which would have had a ramp spiraling down to the bottom, for carriages and wagons.

It was after all originally designed to make moving cargo from each side of the river easier. 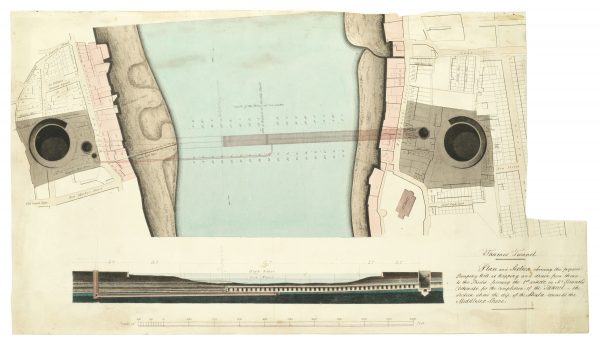 As a pedestrian tunnel, it was more tourist attraction than utility, and the arches were soon filed with small market stalls, and in the gloom, ladies of the night plied their trade.

In 1865 the tunnel was bought by the East London Railway, and it’s been a railway ever since, save for the occasional day when pedestrians are allowed back in once again.

The drawings will be sold at Bonhams on 15th November. There is usually a public viewing of the lots a few days before as well, if you want to have a look in person.