If you were to visit a certain Church in the City of London and go down into its crypt museum, almost overlooked under the stairs you can find one of the most perfectly preserved tessellated Roman pavements in the City.

It is in fact the floor of a domestic house and has a gully which is thought to be the position of a long lost wall.

This fragment of floor can be found in the crypt underneath All Hallows by the Tower, which as it name suggests, is right next to the Tower of London. However, by the tower is a later addition as the Church predates the tower by a good 400 years.

Thus, All Hallows can claim to be the oldest church within the City of London, although thanks to the diligent efforts of German bombers, it is also one of the newest.

There has been a church on the site since the year 675, as an offshoot of the Abbey in distant Barking. Independence brought expansion and Royal connections. The heart of Richard I is claimed to be buried in the churchyard, and the church was used to house the decapitated heads of traitors prior to their removal to spikes on London Bridge.

The church was very nearly destroyed in the Great Fire of London, but was saved by the efforts of William Penn, father of William Penn of Pennsylvania. Restored in the late 19th century, it was gutted by WW2 bombs and rebuilt in the 1950s.

In fact, unless you deliberately look for it, the restoration might escape notice. The roof is not the usual wooden structure, but made from very dark concrete. If you look around you’ll start to notice a lot of concrete, but done so cleverly that I think it adds to the building rather than detracting. 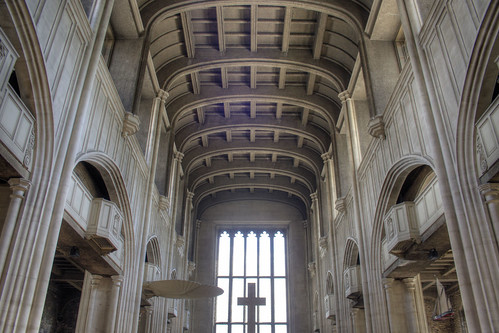 Anyhow, down a narrow staircase at the back of the church and you’ll find yourself in an atmospherically gloomy corridor that is formed from the Saxon era church’s Crypt. 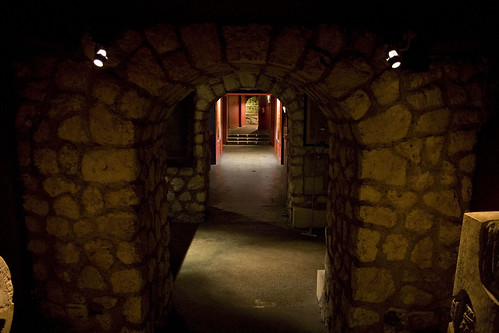 It’s very much a church museum, with lots of displays in glass cases. The model of Roman London looks a bit like something a school might have put together, but is quite interesting anyway. Historic documents sit in displays within alcoves with lights that switch on as you approach – or not sometimes. A rare use of the camera flash tends to help there.

If you don’t know the history of the church, then a drawing of Barking Abbey might confuse, but the panorama of London should be instantly recognisable. 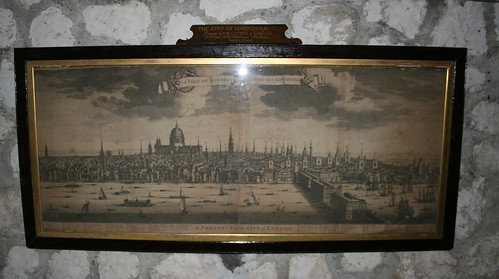 There is also a painting of the old Victorian era church before it was destroyed in 1940. 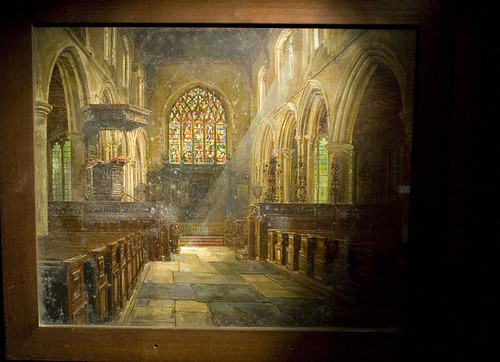 If you hunt for them, there are some curious historic mementos – such as the plaque in memory of Willian Penn, and the crows nest barrel used by Ernest Shackleton on his last Antarctic expedition. The church has a strong links with the maritime trade as you might notice upstairs.

The altar at the very end of the corridor though sits another smaller chapel and altar. This was originally outside the Saxon era church and contains three burials of that era. The three stones underneath the Altar were brought back from Israel, probably by the Knights Templar. 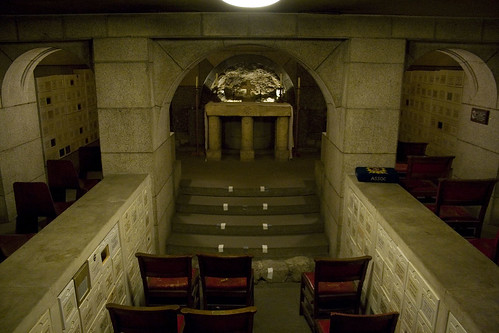 However, it is at the other end, under those stairs you came down that you’ll find the famous Roman floor. To be honest, considering the scale of other Roman remains in London it’s not that impressive a sight, but it is the best bit of flooring around, so that counts for something. 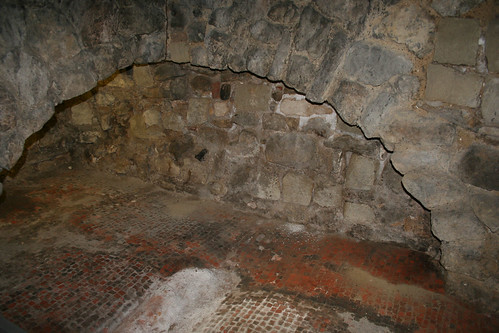 The house it was once part of may have been related to the development nearby of a Roman Bath House, which currently sits under an office block, and will be open for a rate chance to see inside during the Open House Weekend next month.

Other underground Roman remains worth looking out for is the Western Gatehouse underneath a car park by the Museum of London which is open on occasional Fridays for tours. The Roman Amphitheatre under the Guildhall has always left me a bit indifferent though – possibly due to its over restoration.

The Crypt museum is open pretty much whenever the church is open, which is unlike many City Churches, is most of the day throughout the week.

Considering its age, it’s probably not a surprise that it hosts important City ceremonies, such as the Beating the Bounds and the Knolly’s Rose.