Queen’s House in Greenwich is probably more famous though for being the first of the classical Palladian-style building in an England.

In a country that was solidly built of fussy red Tudor brick, this shockingly austere white building, commissioned by James I for his Queen was to mark an architectural revolution and symbolic break from the Tudor past. 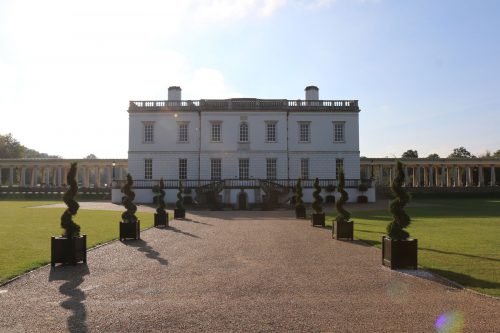 Finally completed in 1635, the Queen had to flee the country just a few years later due to the English Civil War. After the restoration, it was refitted for the exiled Queen, but she died before she could make use of it again.

It then became a rather grand home for officials working for the government, housing for Wrens during WW2, and since then, an art gallery.

Here, your correspondent admits a failing, he has never been to Queen’s House.

All the images I have ever seen of Queen’s House have been of an empty white square box of a building, with nothing of interest in it. Ok, it’s important in the history of architecture, but that seemed to be all it was. Not high up my list of Places To Visit. 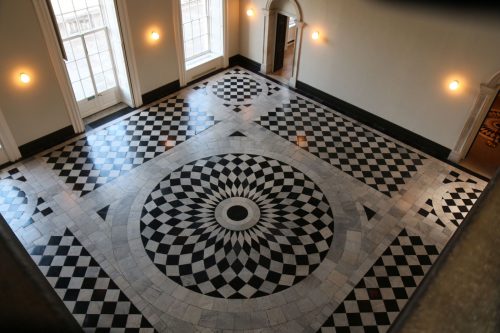 A failing on my part, as the “box” is just one small part, albeit the most famous part, of the building. In fact, Queen’s House is in two halves, which straddle the former main road to Woolwich, and the upper floors were decorated for the Monarchs who used them.

So, it’s ornate, and following a restoration, that peeled back a lot of previous botched work, now a lot more ornate than it has been for many years.

What hasn’t been restored though is the original ceiling. The original ceiling was painted on panels, but those were removed soon after being finished, and now decorate the interior of Marlborough House in central London.

So, they have commissioned an artist to decorate the space, which has been done exceptionally delicately with fine gold strands which lift the space rather than oppressing it. The decoration is very modern but sits nicely in this white empty space. 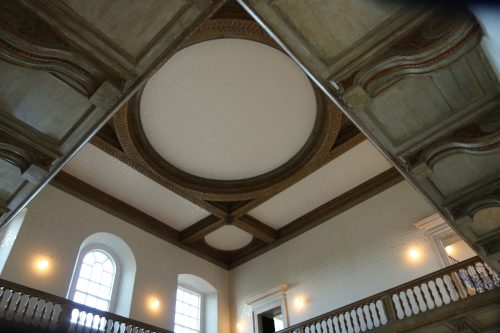 Upstairs, the building was split in half, for the King and the Queen, and the newly laid art seeks to reflect that divide as well.

On the King’s side, expect lots of middle-aged white men in uniforms, but on the Queen’s side more family and softer art. 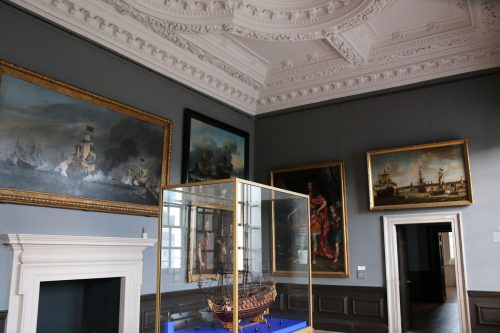 However, the Queen’s side includes a recent acquisition, the Armada Painting, one of the most famous images of Queen Elizabeth I, and the stern dominating gaze of the Virgin Queen sits under the impressive original decorated ceiling. 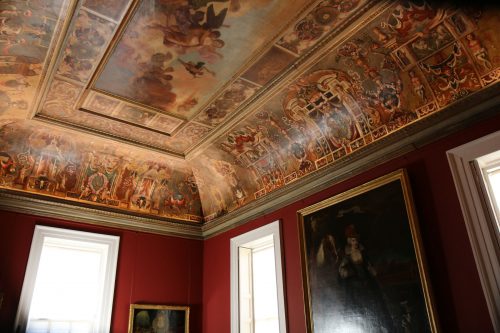 The art aside, it’s the famous building that dominates, from the conventional grand house interiors of the side rooms to the famous cube — which contrary to how it appears externally, is actually at the back of the house, not the front.

But there are also the staircases. 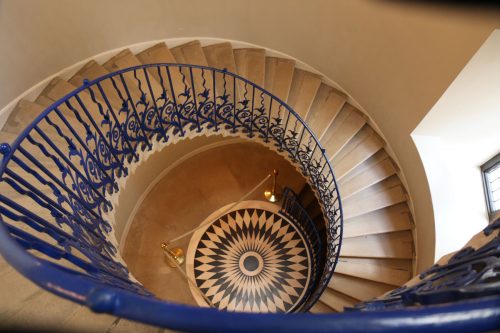 The ascending stairs are normal, conventional stairs, and probably ones you will hardly notice, even if you use them. The more famous are the descending stairs, the UK’s first freestanding spiral staircase.

Incidentally, ascending stairs are known by the fact that they have a landing halfway up for exhausted monarchs to rest, but the descending spiral staircase has no such resting space, as it wasn’t needed.

Of course, the real skill will be to take a photo without someone else peering over the edge.

A visit to Queen’s House is part history, part art and part architecture, and donations aside, also totally free of charge.