See a scale model of the Royal Albert Hall

There’s a small, but interesting display at the moment showing some of the late changes that were made to the Royal Albert Hall during its construction.

I quite like small displays, as they are often of things that wouldn’t otherwise get seen, and are often overlooked by people seeking out the big headline exhibitions.

They are little moments of joy when you stumble upon them, or go hunting for them. In this case, the display wasn’t “in” the room I expected, but in the corridor outside by stairs I didn’t use, so I almost missed it.

What’s here is a lovely model of the interior of the Hall, pretty much as it was built. 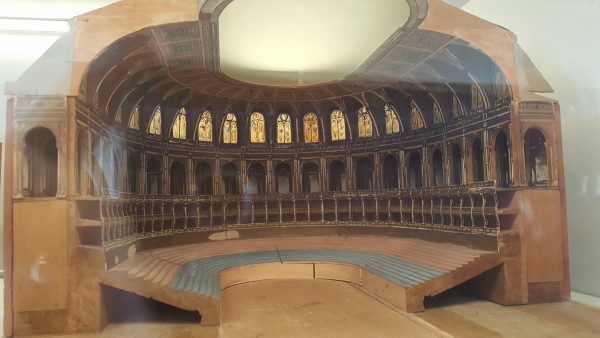 But more interesting, maybe, is the photos of some other models. The models themselves no longer exist, but the photos show how even after the foundations were laid there was still uncertainty about how the entrances to the Hall would work.

One plan called for just two entrances, the other for many more. We ended up with a compromise, half-way between the two, and four entrances.

There’s also a chunk of facade, which is difficult to photograph, but shows how the original design was for the outside to be done in sculpture, but the design was actually done in mosaic. Students at the Art School made them remotely and they were then glued onto the building with cement. 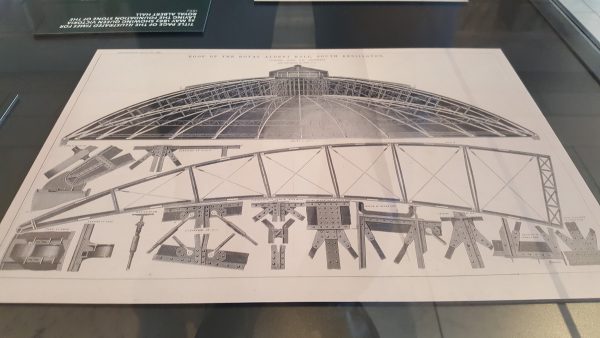 A glass case has some casts, and a drawing of the engineering. During a recent visit, I sat in front of a chap who regaled his friend with stories about how the Albert Memorial was supposed to sit on top of the Hall, but it was never put there.

Which would have surprised the Victorian’s, as the roof was made of glass, and could never have supported the iron memorial, and indeed, there is a vast undercroft under the memorial to hold it up.

The small exhibition is on the 4th floor at the front of the V&A museum, and is there until next January.