Sapphire and Steel have been assigned

I was reminded of a rather excellent TV series earlier today when writing a bit of a silly headline at the day job and thought it’s about time I wrote about the series that inspired the headline.

A lot of people say they used to hide behind the sofa when watching Dr Who, which I never understood as I never found it that scary. Sapphire and Steel though, now that was scary. Very scary, but good scary.

Bad scary is the monster leaping out of the cupboard and giving you a fright. That’s silly. Good scary slips into the unconscious while you are watching the programme, and wakes you up in the middle of the night in a cold sweat.

Sapphire and Steel (S&S to save me typing it too often) was actually supposed to be a children’s show, but was broadcast by an indifferent ITV a bit too late for children to watch, but a bit too early for the likely adult audience who would have loved it. 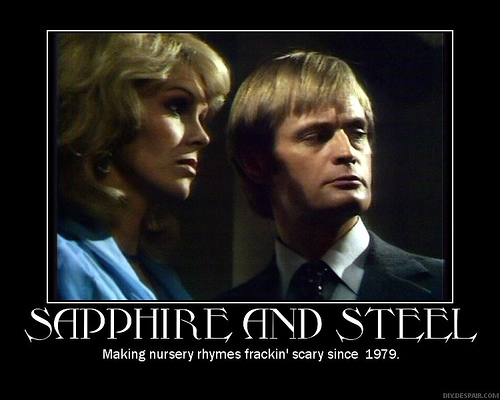 As a child I could only remember bits of one story, but it stuck with me, and maybe 20 years ago I picked up copies on bulky VHS. Remember how I wrote recently that things we loved as a child are often a disappointment when rerun as adults.

S&S is not that show. It is actually orders of magnitude better as an adult as you can probably appreciate the subtleties more.

The 1st, 2nd and 4th of the 6 stores are probably the scariest as they play on really quite profound memories and emotions.

It takes quite something to turn a children’s nursery rhyme into something utterly terrifying, but to this day I do not think about poor robin and the north wind as a nice fairytale, but as a malevolent force seeking destruction.

It is that good at leaching into your mind, helped by the combination of English history and rhymes.

And one of the better things about the series — the good side don’t always win. In fact out of the 6 series, they only win three times. At best, they sometimes compromise or delay the inevitable defeat.

I say evil, it’s not really evil — it’s just different. Time is a force and has “things” that want to break into our world, and do stuff. No one knows why, but they have their reasons, or maybe it is just blind instinct they work on.

It is one of the strengths of the show that they don’t try to explain why Time is like this. It simply is, and that is good enough.

What is curious about the plots is how Time uses otherwise normal objects as its gateway. It seems that old things can wear away at the boundary, much like worn cloth, and sometimes, when combined with something else, a nursery rhyme, an old book, maybe a photo — the barrier is broken.

It is the time shifting that gives the story its narrative, but it is the darkness in the plots that make it such a good series to watch.

And also the darkness in the filming, especially the railway station where a dead soldier arrives to seek revenge. That is a story dominated by the darkness, not just for being set at night, but because Time is itself a moving pool of darkness on the platform.

Watch that story on a dark wintry night and you wont get much sleep.

You’ll probably not look at a kaleidoscope in such a fun way again after one story, and all those people blending vintage and modern photos should really stop doing that now. Seriously, really just don’t do it. That scares anyone who has watched S&S before.

If you’ve ever wondered why some people don’t like having their photo taken — they’ve probably watched that episode of S&S.

The others are interesting, but as good dramas than for being scary. It’s the scary ones that stick with you. They linger in the mind long after you’ve seen the tv show.

No one runs in these programmes, no one shouts or screams, no one waves a magic wand. It’s a calm collected deeply physiological scare that they deliver.

The opening credits are frankly, a bit cartoonish, and lots have commented on the lack of budget for the TV sets — but that adds to the programme. The lack of special effects lets the storyline breathe and dominate, and damn well scare you.

For some reason, I have never got around to watching the last story. It’s a sort of weird treat I am saving for one special day.

NEWSLETTER
Tagged with: sapphire and steel