One of the pleasures of living in the docklands area is the ability to walk along the riverside – although the council required private housing to provide a river path which is nice, but declined to make the same requirement for its own housing, which is less nice.

Anyway, a stretch of pathway right next to Canary Wharf riverside pier was blocked off over a year ago for the construction of three tall glass blocks known as Riverside South. This caused quite a considerable problem for locals, as there isn’t a convenient walking route around the diversion, and thanks to a lot of pedestrian crossings, several road junctions, and two sets of steps/lifts – it added 5-10 minutes to the journey time.

However, adding to the misery, is that work on the building site ground to a halt over six months ago, and a perfectly usable riverside path was still being barred to entry. A lobby group was set up to try and change things.

Earlier this week, the route was – somewhat grudgingly – reopened by the developers/Canary Wharf – but only after adding a lot of frankly totally unnecessary 2-metre high fencing around it.

Some context – the map below shows the route affected. Blue is the old/restored route and red shows the diversion. The distance isn’t much further, but does involve lots of delays due to the need to cross five roads. 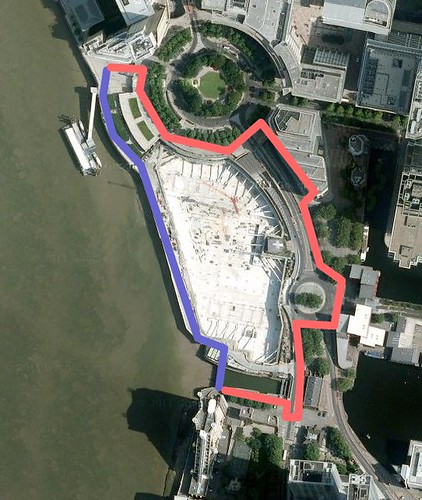 Approaching from the south, the old dock bridge that was perfectly fine for everyone has now had high fencing put along it, and the flat surface has been turned into a slope.

OK, there are a couple of steps at the other side which has now been covered over by the slope, and we should seek to be accessible for everyone now, so that bit is understandable. 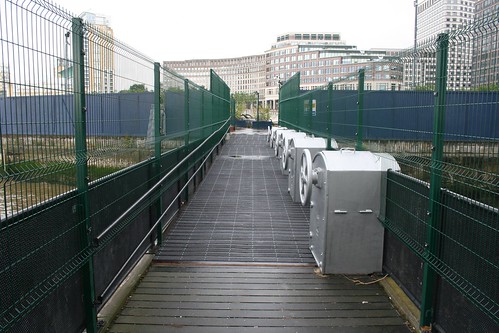 Then it is a wide tarmac covered path with high green fencing all the rest of the way to the other end. 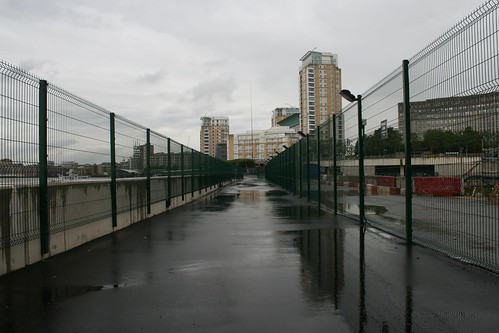 I presume the sign refers to the land I am standing on, not the river on the other side. 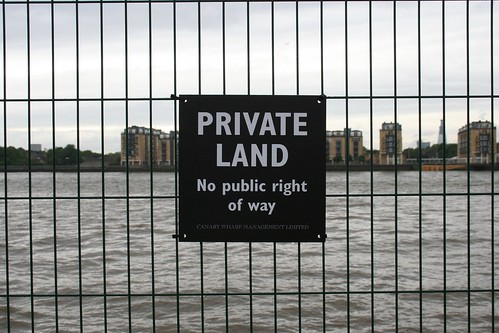 So, yes it is nice to have the path back, and it is kinda nice to have it freshly lain with new tarmac, but a lot of the fuss seems to be that they felt that they had to install the fencing, some more CCTV, and a surprising amount of lighting.

However, take a walk along the pathway at North Greenwich, and in many places there is no fencing at all between human and river, the path is gravel and the lighting sporadic. No one dies along there (that I know of), so why the need for all this additional work at Canary Wharf? The old building site path was perfectly usable.

And the whole thing closes again in six months time.

While the three skyscrapers are still on-hold, there will be some interim works to raise up the level of the building site to street level and leave a flat open space. Probably in time to be hired out for Olympic related events as will be happening on the other side of Canary Wharf.

I can understand, and agree with the need to close the path if deliveries from the river are taking place – or something specific takes place that would imperil people – but a total shut-down seems overkill.

We better enjoy it while we can. 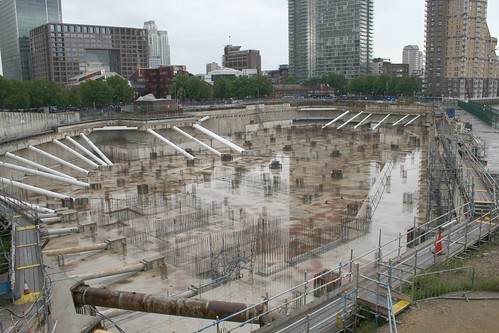 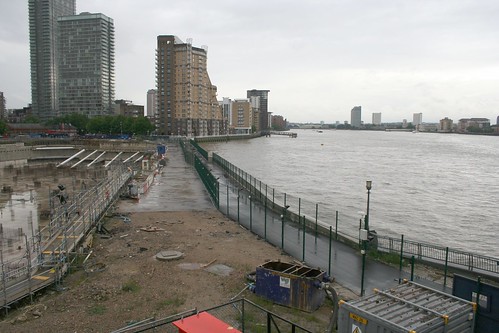 The newly fenced off riverside path