Archaeologists from MOLA uncovered the fresco, which is 2.5 metres wide, whilst undertaking fieldwork for a new office development. It was recovered six metres below modern street level. 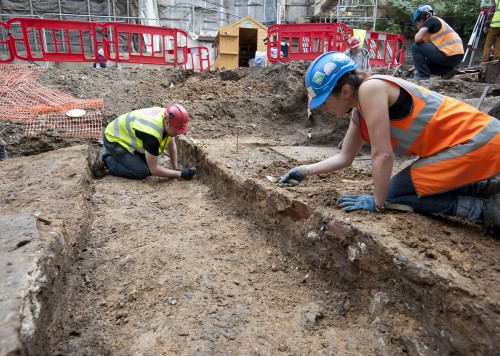 MOLA archaeologist excavate the line of a wall belonging to the 2nd Roman Forum of London, which cut through a late 1st century fresco © MOLA

Dating to the late 1st century AD, and the first decades of London, it is one of the earliest surviving frescos from Roman Britain.

For experts, the elaborate fresco reveals something of the fashions and styles of the first wealthy Londoners. The painting is likely to have decorated a reception room where guests were greeted and entertained. 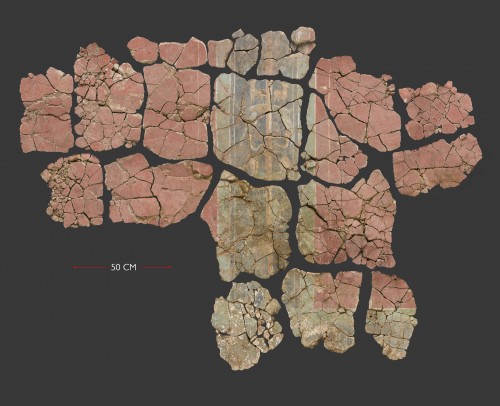 A Roman fresco which is more than 2m wide and 1.5 metres high, pieced together to show the decorative scheme © MOLA

Thanks to a huge Roman construction project, the fate of this rare wall painting was literally sealed in the ground. In AD 100, construction of the 2nd Forum Basilica, the main civic centre for the city and the largest Roman building ever built north of the Alps, began. In advance of the construction of the Forum, the area was flattened. The painted wall was deliberately toppled and the Forum immediately built over it, incredibly preserving the fresco for nearly 2000 years.

Discovered face down, the fresco was identified from the distinctive markings of the keyed daub onto which the plaster was attached. The fragile remains were carefully removed from the site by MOLA’s archaeological conservators who lifted the fresco in 16 sections. Each section was supported, undercut and block lifted so that soil encased and protected the plaster. Back in the lab the conservators worked quickly to micro- excavate the soil whilst it was still damp, to expose the millimetre-thin painted surface beneath.

Liz Goodman, Archaeological Conservator for MOLA, said: “This was a really challenging but rewarding conservation project. We were up against the clock working on this huge and fragile fresco but it was a joy to uncover the decorative plaster that hadn’t been seen for nearly 2000 years.”

The central section, on a background of green and black vertical panels, depicts deer nibbling trees, alongside birds, fruit and a vine woven around a candelabrum. Red panels, bordered with cream lines, surround the main decorative scheme. The fresco was hand-painted by a skilled artist in natural earth pigments, except one area of red on the twisting vine stem which is picked out in cinnabar, an expensive mercuric sulphide pigment that had to be mined in Spain.

Fascinatingly, a slight error in the design reveals that the craftsman who painted the fresco made a mistake. It suggests that there was more than one person painting the wall and that they may have been working to a pre-prepared template. The mistake could only have been corrected by repainting the whole middle panel.

Although small fragments of Roman wall plaster have been found in London, complete collapsed wall paintings are extremely rare and the 21 Lime Street example is one of the earliest known from Britain. This design scheme has not previously been seen in Roman Britain; the closest example comes from a Roman villa in Cologne, Germany.

Claire Cogar, Archaeology Project Manager for MOLA, said: “A very old construction project (circa AD 100) sealed this exceptional fresco in the ground, and it is thanks to modern development that our archaeologists had the opportunity to explore our buried past.”

Specialists at MOLA are still studying the fresco and archaeological records from the dig to build a picture of what the area looked like in the Roman period and how it developed over almost 2,000 years of London’s history. 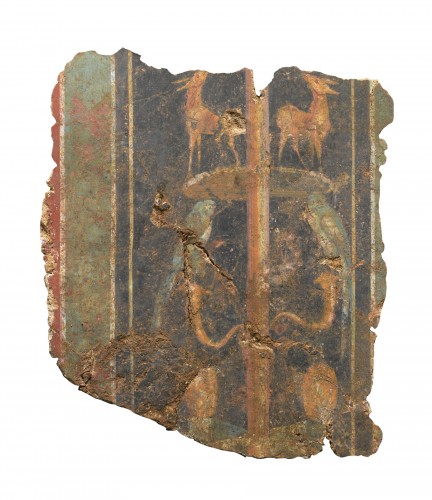 One of sixteen sections of a decorative fresco, dating to the earliest decades of Roman Britain in the 1st century AD © MOLA