Rare panel of a Baron turned Saint goes on display

A rare devotional panel has gone on display at the Museum of London, although it’s in a small display case that is quite easy to overlook if you don’t know the significance of the object. 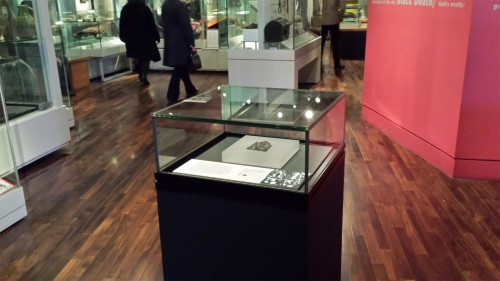 Depicting the capture, trial and execution of Thomas, Earl of Lancaster, political rebel turned martyr, the object was discovered by archaeologists, from MOLA (Museum of London Archaeology), whilst excavating by the River Thames.

A piece of political propaganda and religious art, the panel is one of the largest and the finest examples of its kind. Cast in metal, the scenes are a cautionary tale for ambitious politicians, yet the production of the object reveals another story; that, in death, Lancaster was elevated to an almost saintly status.

Lancaster was a cousin of King Edward II and one of a group of barons who tried to curb the king’s power. Having caused huge political unrest, in 1322 Lancaster was defeated by Edward and publicly executed for treason near Pontefract Castle.

Within six weeks of his death, miracles were being recorded in connection with his tomb. Whilst in life Lancaster had not been a saintly man, a cult soon built up around him, largely owing to the king’s unpopularity. 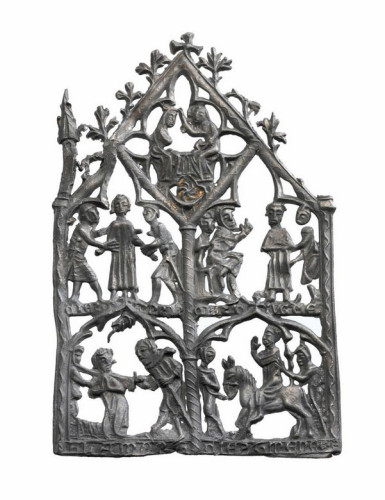 For the first time, this find reveals the maker’s intended message. In slightly garbled French, the panel is read clockwise from the top left: ‘here I am taken prisoner’; ‘I am judged’; ‘I am under threat’ and lastly ‘la mort’ (death). The Virgin Mary and Christ look down from heaven, ready to receive Lancaster’s soul.

Although a rare find today, the panel would have been mass produced at the time. A small number of parallels exist but these are fragmentary or in a poorer style.

Sophie Jackson, MOLA archaeologist, said: “It’s thanks to the wet ground of the Thames waterfront that this beautiful metal object survived in such remarkable condition. It has an intriguing story and reveals a great deal about the political climate of the day.”

The panel is on display in the Museum of London’s Medieval Galleries until 28th Sept 2015. 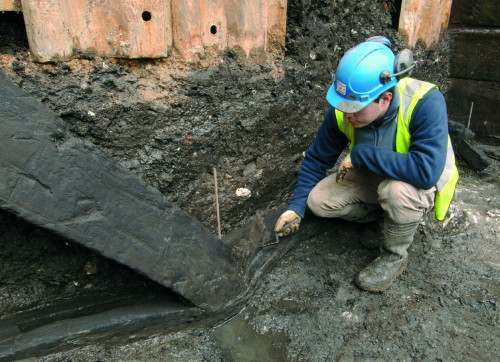 The devotional panel was found in the muddy ground of the River Thames waterfront behind medieval timber revetments.
© MOLA (Museum of London Archaeology)